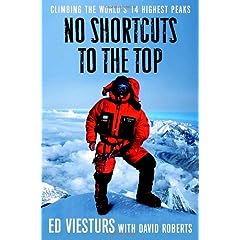 Note: This review has been edited in the vane attempt to remove the suck that was evident in the first draft.

I’ve been promising to post my thoughts on Ed Viesturs’ mountaineering book No Shortcuts To The Top for a week or so now, and I’ve finally had a chance to not only finish it, but collect my thoughts as well.

The book chronicles Viesturs’ attempt to climb all 14 of the 8000 meter peaks, without the use of supplemental oxygen. But along the way, you’ll also learn about Viesturs the man, and his life both on and off the mountain. He talks about growing up in Rockford, Illinois, and reading Annapurna, his first book on mountaineering as a teenager. The book had a profound impact on his life, and he knew even then that he wanted to pursue a life of climbing. Later, when selecting a college, he elected to go to the University of Washington in no small part because of it’s proximity to the mountains, where he could finally begin to pursue the adventures that he’d been dreaming of in his youth. From there, he was off, learning as much as he could about the sport, meeting like minded individuals, heading to the mountains as often as he could, and eventually becoming a guide on Mt. Rainier.

Viesturs graduated from college and went on to veterinary school, where by most accounts he was a talented, gifted student. But the mountains kept calling his name, and he knew where his heart lay, while the other members of his Vet class were receving their diplomas, Ed was climbing in the Himalayas, and he wouldn’t have it any other way. The contacts he made while guiding on Rainier would eventually lead to invitations to join more expeditions to the Himalayas and attempts on Everest and Dhaulagiri. Over time, I added a few more 8000m peaks to his resume, and he began to formlate a plan to conquer all of them, and without oxygen. Eventually he came up with the idea of Endeavor 8000, the name he gave his quest to scale all of the mountains.

One of the more interesting aspects of the book for me, was Ed’s dealings with his sponsors and selling them on the idea of Endeavor 8000. Even today, it’s extremely difficult for a climber to get sponsored and to make enough money to cover his or her expeditions, gear, and other expenses, let along make a living at it. But back when Ed started, it was nearly impossible, and he discusses some of the things he had to do in order to raise the funds he needed, or to attract the attention of a sponsor. This glimpse into the business side of climbing, and other simiilar sports, was sobering but also very informative.

It would take Ed a number of years to eventually achieve his goal, and along the way he would get married, start a family, watch some of his best friends die on the mountain, and become a brand in and of himself. ironically enough, the final mountain for him to summit was Annapurna, the same one that had inspired him to begin climbing as a teen. Through it all, he maintained his same outlook on climbing. Go safe, trust your instincts, and always remember: “Getting to the top is optional, getting back down is mandatory.”

The book is well written, straigtforward, and easy to follow. Ed, and his co-author David Roberts, convey a good sense of what it’s like at high altitudes, where the air is thin, and the dangers are high. But they also don’t beat you over the head with those dangers. You’ll continualy find yourself amazed at not only what Viesturs does while climbing, but also how nonchalant he is about his exploits. For instance, he happily discusses his “two-fers” which in this case, means summiting two 8000m peaks with a very short time of one another. Generally days. The idea would be, for instance, to acclimatize on Everest, summit, rest for a few days, then climb Lhotse in a quick, alpine style ascent. An amazing feat that he pulled off on more than one occasion.

Sometimes the book is a little too casual however, as it discusses some aspects of mountaineering in a very off hand manner without going into detail. Especially early on. If you’re familiar with high alpine climbing, you’ll hardly notice, but if you’re new to the sport, you may wonder what exactly Ed is talking about as he names off obscure equipment, climbing techniques, or locations. Fortunately, this is a very minor quibble, and better yet, there is an excellent glossary in the back of the book that will probably cover most questions that will arise.

Likewise, the book drops names here and there that are familiar to someone who has a sense of the history of climbing, and the people who make up the community, but I think you would receive a bit more depth from those names with some more info on who they are. Some are explained but others are not. Perhaps I was more cognizent of it as I tended to know who these people were and some of the things they had done. To someone else, they may just seem like names.

One portion of the book that I found particularly fascinating, was Ed’s involvement with the events that occured on Everest during the disastrous 1996 climbing season. Those events are well chronicled in Jon Krakauer’s bestselling Into Thin Air. For the first time ever, Ed talks about what happened on the mountain during thoe tragic few days and how it felt to know that two of his best friends were stranded, high on Everest, with no hope of rescue. It’s a touching and powerful chapter to read, and it underscores the danger of high altitude cliimbing. Even the survivors are left with scars it seems.

If you’re looking for an excellent, hard to put down, book, you could do much much worse than No Shortcuts To The Top. It’s a fast, easy read, that will leave you with a new found respect for Viesturs and others like him who go up into the high mountains for the love of the climb and the challenge of pushing themselves. You’ll also learn a lot about high altitude mountaineering, and the logistics that go into a climb of this type. Expeditions to these mountains are not weekend affairs. They require months of preperation, and camp set-up. There are weeks on the mountain to acclimatize, and tense days of watching the weather, waiting for your window, and making a bid for the summit. All of that, and more is captured here in this book. But what is also captured is the essence of a man who has climbed those peaks and did it his own way.

The book will make a great Christmas gift for the mountaineer, or aspiring mountaineer on your list. You might want to pick up two copies though, as they probably won’t want to share. 🙂