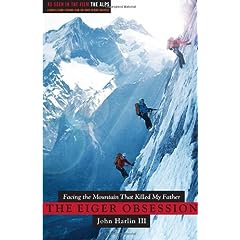 I’ve been teasing a book review for The Eiger Obession since before I left for Africa. There is something to be said for a 28 hour (One way!) travel time for helping you get caught up on your reading. Here are my thoughts on the book…

The Eiger Obession by John Harlin III is an interesting dichotomy of parts. On the one hand, it’s a biography of Harlin’s father, John Harlin II, who was an amazing climber in the Alps during the 50’s and 60’s, and on the other hand it’s an auto-biography of Harlin III himself, and his life following his father’s death on the Eiger back in 1966. Finally, it’s the story of a son, following in his father’s footsteps, to silence some demons, and even breakout from a long shadow, and form his own identity.

John Harlin II was pilot for the U.S. Airforce stationed in Europe during the 1950’s. He was tall, athletic, and very charismatic. He was also a climber of no small skill, and he loved the Alps. They were practically his own personal playground, and over the years, he put up new routes, and climbed all the major peaks in the range. He became a legend in the European climbing community and even earned the nickname “The Blonde God”. There was one route however that Harlin hadn’t conquered, but continued to have dreams of completing: The Eiger Direct. Up until that time, there was only one route up The Eiger, the biggest, baddest face in the Alps, and it wandered all over the wall until it reached the top. Harlin wanted to put up a straight route, a more direct route. So, in 1966 he went after that route, with a team of excellent climbers I might add, but in doing so, he lost his life when a frayed rope broke while he was on it. In the end, the team reached the top, and the route was called the “John Harlin Route”, but his death had profound consequences on the people who knew him.

The second half of the book follows Harlin’s son, John Harlin III, as he grows up and becomes quite a good climber in his own right. However, along the way, he can always feel the shadow of his father over him, as other climbers question his abilities and accomplishments. And of course, always looming over him, is The Eiger itself, which he finally faces for an upcoming IMAX film entitled The Alps. Upon conquering The Eiger, Harlin III at last puts some of those demons to rest.

The book itself is very well written and does a good job of mixing the biographical and autobiographical elements. Harlin III, who is no stranger to writing and editing, paces the book nicely, and you’ll find that it’s quick and easy to read, while still offering all the details and information necessary to tell the story it needs to. He also does a fine job of walking the fine line of being an adoring son, who remembers his father in one light, while still examining the way others saw him as well. Harlin II was known to exaggerate the truth from time to time, and other climbers found him to be a bit of prima donna or poser on the mountain, and yet the author acknowledges those elements in his father, without losing his own boyish admiration that many of us can relate to with our own fathers.

The book is also a nice history of The Eiger itself. Harlin gives us plenty of background on the mountain that became the stage for both his father, and in due time, himself. It’s probably the most famous face in the Alps, and while it’s been climbed numerous times, it still remains iconic to this day.

In the end, The Eiger Obession is a very satisfying read. It’s a well told story of two men, father and son, who climbed for different reasons, but shared much more than just a name. I enjoyed the book all the way through, and would highly recommend it to climbers and non-climbers alike. The story is compelling and told in such a way that anyone can enjoy it. It should also make a great companion to The Alps when it’s released to IMAX theaters soon. The book would also make a great Father’s Day gift in a few months as well, and will make a fine addition to anyone’s personal climbing library.

I’ve got another book finished that I’ll be reviewing soon as well. Something of a completely different nature, but just as enjoyable for very different reasons.