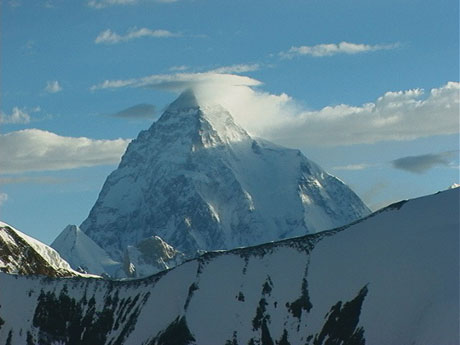 Thinks are starting to get interesting in the Karakorum, as teams have begun to arrive at BC on K2. According to K2Climb.net though, it hasn’t been an easy start to the season.

Chris Warner’s team arrived in basecamp on June 1st to find Czech climbers Radek Jaros and Dennik Zdenek already there. The climb is already in jeopardy for Radek however, as he crushed a finger under a dislodged boulder while setting up camp. Ouch! The team split into two groups, with one group focusing on organizing gear and setting up the solar power grid, while the other went ahead to recon the site for ABC. The recon team spent over eight hours marking a path through the icefall, carefully avoiding a rotting body that is being pushed up by the glacier, before returning to camp without reaching ABC. The dead body is a grim reminder of why K2 is called The Savage Mountain.

On Sunday, the recon team set off once more to complete their task of marking the route to ABC. When other team members caught sight of them from basecamp, far off in the distance, they broke out the binoculars to watch their progress. They began to get nervous when the two men disappeared suddenly. At first it was thought that they may have went over a ridge, but they decided to organize a search party just in case. As they set off down the path to follow them, word came over the radio. Both men had fallen into two separate crevasses!

By the time the rescue group reached them however, both men stood on the glacier, a little weary and shocked, but alive. Next to them were two holes in the ice, and the fact that they were roped together when they fell into their respective crevasses, meant that neither of them feel too deep. They managed to scramble out are fine.

Wow! Climbing K2 is a nasty business to say the least, but I’d be worried if I were having these kinds of issues and you hadn’t even established Advaned Base Camp yet. So far the teams seem snake bitten. Let’s hope their luck changes for the better!