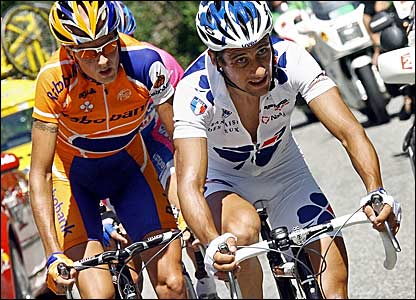 Sandy Casar of France, made the host country very happy today, by claiming the win in the 18th stage of The Tour de France. Along the way he managed to crash, by hitting a spectator’s dog no less, but got back on the bike, and held off a furious charge at the end to claim his first ever stage victory on the Tour. He was followed closely by Axel Merckx, son of cycling legend Eddie Merckx, of Belgium and Laurent Lefevre also of France.

Alberto Contador of Spain continues to be the over all leader in the General Classification, and will head into tomorrow’s individual time trial wearing the Yellow Jersey. His nearest competitor, Cadel Evans of Australia, gained 3 seconds today as the Peloton split into two groups near the end. Evans is 1 minute, 50 seconds back, while American rider Levi Leipheimer remains in third, 2 minutes, 49 seconds off the pace.

The time trial tomorrow will run 35 miles from Cognac to Angouleme and will be some of the fiercest racing yet. The top three riders all relatively close, and a poor day on the bike or a bad fall could make or break someone’s Tour. By tomorrow this time, we should know the winner of this year’s race, as Sunday’s ride into Paris, and onto the Champs- Elysees is generally ceremonial in nature, and considered a victory lap for the Yellow Jersey.

Perhaps the biggest news of the day is that no one has tested positive for a banned substance and subsequently kicked out of the Tour. I think that might be some kind of record.