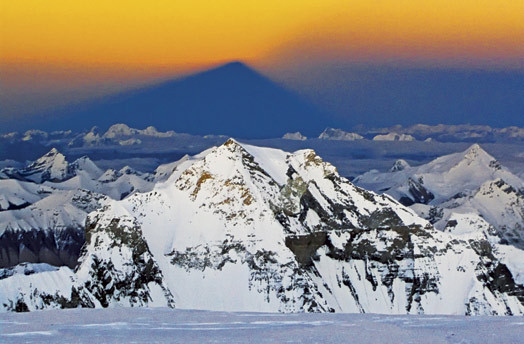 Yesterday I mentioned that the highest raning Chinese General in Tibet was being forced into retirement because of the International outcry over the Nangpa La shootings from last year. As I explained in that article, a group of refugees from Tibet were crossing the pass on their way to Nepal when they were ambushed by Chinese soldiers who shot one young woman, a nun no less, to death and took a number of young children into custody.

The incident may never have come to light at all, except there were a group of climbers on Cho Oyu nearby who witnessed everything, snapped some pictures, and even shot video. Eventually they got the story out to the Internet by sending word to ExWeb who then took up the cause.

Now, nearly a year later, and more of the story is coming to light. Alpinist Magazine has published a first hand account of the entire incident on their website. The story entitled Borderline is written by Pavle Kozjek, a Slovenian climber who was there on Cho Oyu and witnessed the entire scene. He give a riveting first hand account of what happened that day, and what was going through his mind, and that of the other climbers, who were there with him.

The article is an excellent read, and I highly recommend it to anyone who followed the whole affair last year. As you read it, you can appreciate the fear and anxiety of those that witnessed the horrible act, as they didn’t know how the Chinese would react to them. It’s a sobering peace about a man who went to the sixth highest peak on Earth to challenge himself but ended up being challenged in ways he never thought possible. Very powerful!