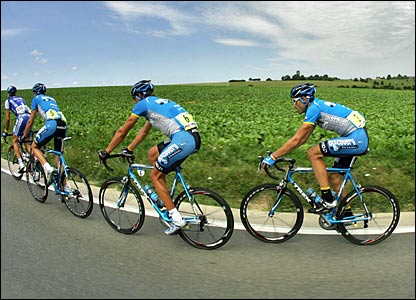 As I’m sure you’ve all heard by now, Team Discovery Channel has disbanded following a successful run at the Tour de France that saw them claim the team title, and put one of their riders, Alberto Contador, on top of the podium. The team cited “fractious leadership in the sport, constant doping allegations and the struggles of finding a new sponsor” as reasons for making the move.

I had a number of people ask me over the weekend what I thought of the situation, and I have to say I’m not surprised in the least. While the team is partially owned by Lance Armstrong, it really didn’t have a star that it could sell to the American market, where cycling has really fallen off since Lance retired.

Ratings for this year’s coverage of the Tour on the VS. Network were poor, as were last years when an American actually won it. The general sense I get from most people I talk to is that it’s not an interesting sport to watch (I disagree!) and that without Lance, no one cares. Even the sale of bikes and cycling gear has taken a down turn in the past few years.

While I’m sad to see the Discovery Team disband, as it’s an end to an era, they did have a great run. 8 individual Tour titles in 9 years, 7 by Lance of course, is nothing to sneeze at. It’s also a sign of the times with what is going on in the sport, when sponsors shy away, and a team cites the doping scandals as a reason to call it quits. Make no mistake, cycling is in a time of crisis, and it certainly could be, and should be, a turning point for the sport. The next few years are going to be crucial, and it’s important that it cleans up it’s house.

That said, I’m not sure that anything can be done to win back American fans short of another charismatic, American rider coming along and dominating the sport again. Someone like Lance only comes around once in a generation, if that. So for now, I expect cycling to return to it’s niche status.

3 thoughts on “Team Discovery Channel Calls It A Day”