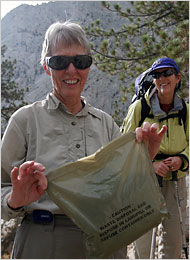 This next story follows in the wake of my Leave No Trace post from a few days back. The New York Times is reporting that the highest outhouse in the U.S. has been removed from Mt. Whitney.

Citing increasing dangers, and expenses, for managing wastes, the Forest Service made the move to remove the high altitude latrine from Whitney, and a number of other mountains as well. In the past, a helicopter had to be used to fly to the site to pick up the waste, which was then returned to be disposed of by workers wearing hazmat suits. Flying the helicopter through the canyons and that close to the mountain, was inherently dangerous, and expensive.

Now, hikers and climbers will be issued WAG (Waste Alleviation and Gelling) bags to use instead. The bags, which are already being used in the John Muir Wilderness area and the Grand Canyon, offer a means for us to “leave no trace” by packing out our waste products. As many of you know, other methods such as burying the waste are ineffective on mountains like Whitney do to heavy traffic and not a lot of soil. The wagbags are designed to biodegrade over six to nine months, and are a safe way to keep the environment clean.

While the proposition of carrying around a bag of waste doesn’t seem that appealing, I think it’s for the best. We want our natural resources to remain as pristine as possible, and since the old outhouses have become a difficult thing to maintain these seems like a good alternative. Plus, it makes us more responsible people, which can only be a good thing. Obvioiusly this is a touchy subject, but a very important one.

By the way. Should I be concerned that we have a local chain of convenience stores here in Austin, Texas called Wag-a-Bags? Hmm… I may decide to shop elsewhere the next time I need my Mountain Dew fix.

Update: The WildeBeat outdoor podcast did two episodes on this very topic last year with more informaiton. You can find Part 1 here and Part 2 here.