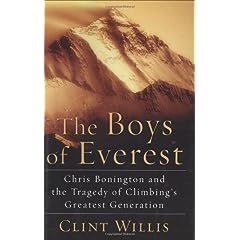 I just wanted to post a quick note to let everyone know that Clint Willis’ book The Boys of Everest is now available in paperback. I posted my thoughts on it last year when it was originally published, but just in case you haven’t had a chance to pick it up yet, it’s a highly recommended read.

In a nutshell, Willis chronicles the climbing exploits of Chris Bonnington and a group of motley climbers that became part of his regular crew, as they went about changing the face of climbing in the 60’s and 70’s. “Bonnington’s Boys” came along after Hillary topped out on Everest, and there was a wide belief that there were no more great climbs to be had. But this daring group saw things differently, and found plenty of challenges still existed. The book really does span an era of climbing, tell the stories of the men, their families, and their adventures in a gripping way.

The book was a 2006 Banff Mountain Book Finalist, and can be found at Amazon of course, but should also be in your local bookstores now. It’s a must read for climbers, armchair mountaineers, and historians alike.