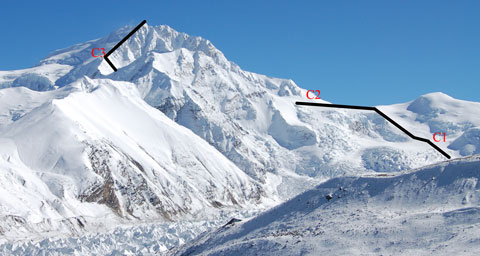 This morning we received the latest dispatch from Alan Arnette who is currently climbing Shisha Pangma in Tibet. The team has been stalled out in ABC, waiting for a weather window to open, and hoping that the upper portions of the mountain would stabilize, allowing them to make their summit bid. It looks like their patience is finally paying off.

Alan reports that the forecast looks good, with a weather window opening around Oct 7th or 8th. Furthermore, avalanches on the higher slopes have allowed the snow to settle, making their route safer, and giving them the opportunity to at long last make a go at the top.

Several members of the team are already in C1 and C2, while Alan and a few others will begin to make their way up tomorrow. They’ll spend a day at each camp before proceeding up to C3 on the weekend, and from there they’ll evaluate their chances of making the summit. If it’s unsafe, they’ll return to ABC, pack-up and head back to Kathmandu. But if everything looks good, they’ll take their chances at the summit.

Climbing Shisha Pangma, the 14th highest mountain in the World, is the latest in a series of training climbs for Alan, as he continues on his Road Back To Everest next Spring, where he’ll be climbing to raise money and awareness for the Cure Alzheimer’s Fund. With a any luck, his next dispatches will be from the higher camps, with news of his success coming as early as the weekend.