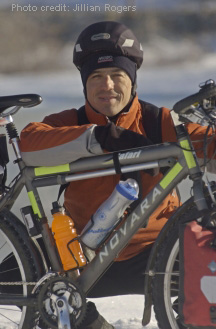 Circumnavigating the globe has always been a challenging endeavor for any adventurer. It a long and arduous journey no matter how you approach it. To circle the globe using nothing but your own power puts that journey into a completely different class altogether. It demands even more stamina, concentration, dedication, and heart. But that’s not stopping Erden Eruç from Around-n-Over.org who have already undertaken that challenge.

Not only is he circumnavigating the globe under his own power, but he also intend to summit the six highest mountains on the six continents he’ll pass through along the way. Hence the “Around”, as in the World, and the “Over”, in this case the mountains. The plan is to complete the project in stages. Back in 2003 he rode his bike from Seattle to Alaska, where he climbed Denali. You can find out more about this first stage by clicking here.

The second stage of the journey (details here) is a mixed land and sea leg. The land portion was completed back in 2004 with an 82-day bike ride from Miami to Seattle. In 2007, this stage continued with a second land leg from Seattle to Bodega Bay in California. From their, a the first sea leg began in July and continues now with Erden rowing his way to Australia, a journey of some 6700 nautical miles. Upon arrival to Australia, it is his intent to bike to Mt. Kosciuszko, the tallest mountain on that continent.

Obviously a project of this nature requires a lot of funding and planning, which is why it’s been spread out over several years already. At the official website you can learn more about the team behind the project, read dispatches from the road and track Erden’s progress, as well as take a sneak peek at his intended route as he continues this circumnavigation. Eventually he’ll summit Everest, Elbrus, Kilimanjaro, and Aconcagua on his way around. The only one of the Seven Summits to get left out his Mt. Vinson in Antarctica.

As I write this, Erden is halfway across the Pacific Ocean and slowly, but surely, working his way toward Australia. He has a long way to go on this journey, and obviously it won’t be an easy one. But then again, the most rewarding journeys seldom are. I’ll continue to keep tabs on his progress and post updates as he reaches milestones along the way. It should certainly be a fun adventure to watch unfold.