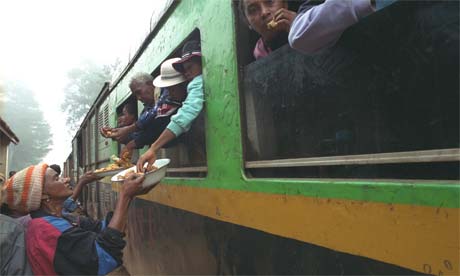 I’ve always thought that traveling by train was a great way to see the countryside of any place you’re visiting. There is a certain romantic nature to traveling by rail, especially in a unique, exotic location such as Madagascar. That’s exactly where Simon Reeve was recently while filming for an upcoming BBC travel special when he discovered one of the great train rides in the World, and wrote about it for The Guardian.

This particular train ride is just 101 miles in length, stretching from Fianarantsoa in the central highlands to Manakara on the Madagascar’s East Coast. But along that route, the train passes through lush jungles , crosses over more than 60 bridges, and rumbles down the third steepest railway incline like a roller coaster at Disney World.

Madagascar itself is an island teeming with adventure. The country has been geographically cut off from Africa for thousands of years, and as a result, it has become home to unique and diverse wildlife. The article notes that 95% of the creatures living there exist only on the island itself and no where else in the World. The dense jungles and remote nature of the country have made it difficult to explore but give it a strong appeal to adventure travelers intrigued by it’s mysterious nature.

The article links to Rainbow Tours who can help set up a trip to Madagascar and put you on this amazing train ride across the country. After all, if you’re going to explore a mysterious country, you might as well do it by train.