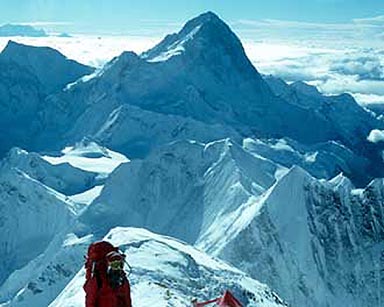 RussianClimb.com received a couple of short SMS messages from Denis Urubko today. The first proclaimed “We are at 7400 m, alive”. While the second gave a few more details on what is happening with the Kazakh team, which in addition to Denis, includes Serguey Samoilov and Eugeny Shutov.

The second SMS reads as follows:

We are at 7400 m, We set the half of the tent on the tiny site, sit without sleep, ready for the emergency evacuation. The wind is incredible here. I hope for the morning 🙂

Clearly the boys have made it safely to the 7400m mark, and are waiting to see if the predicted weather window will open so they can make their summit bid over the weekend. From that rather grim sounding text message however, it also seems clear that they are weathering a harrowing night on the mountain. Hurricane force winds, low oxygen, and no sleep are a fairly potent combination to try to overcome.

There has been no word on Nives Meroi and the rest of her Italian team today, so I’m assuming they are still in BC waiting for the weather to change as well. Perhaps they’ve moved up to C1 or C2 in hopes of the window opening over the weekend as well. Both teams are hoping to become the first to summit Makalu in the Winter, claiming the last of the 8000m Himalayan peaks to go unclimbed in that season.

Perhaps history will be made this weekend. For now, we’ll have to wait for the next dispatch.