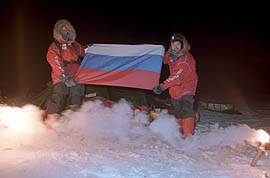 Remember yesterday when I suggested that Russian Polar Explorers Matvey Shparo and Boris Smolin should get plucked from the ice ASAP and whisked away to some place warm and tropical? Well clearly they didn’t get the message, as the two men, who became the first to reach the North Pole completely in winter, are still there, apparently enjoying the view.

According to this story over at ThePoles.com Mat and Boris intend to stay at the North Pole until March 21st, a full week after they reached it. Why you might ask? Why to enjoy the sunrise of course! On that date, the Vernal Equinox, the first sunrise of the year will hit the North Pole, and these two intrepid explorers who have traveled over 1000km in darkness, want to be there to see it. That my friends, is dedication.

The article also describes their final few moments on the ice before reaching 90° North. They left their sleds behind because the ice was blocking their way and preventing them from moving easily, and they had to search around to find the actual Pole itself, but when their GPS read “90° 00′ N” they began the celebration, which included sending a signal flare in the air. Fireworks at the North Pole! After that, they set up camp and decided to wait for the dawn.

Russian President Vladamir Putin also sent along his words of congratulations saying: “I would like to congratulate you on your victory – the first in history attainment of the North Pole during the polar night.” I’m sure there are some very proud and relieved friends and family back home in Russia as well.

I’ve said it before in a comment I made on these two men. In the dictionary, if you look up “Hardcore” you’ll see a picture of Mat and Boris. Even when standing still, the manage to amaze me. Most people would be more then ready to get off the ice, but these two decide to stop and watch the sunrise.