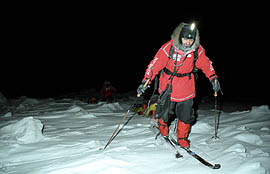 ThePoles.com has postedanother update from Boris and Matvey, the two Russian arctic explorers who have been attempting to become the first men to ever reach the North Pole entirely in Winter.

The good news for today is that the guys have passed 89°N, meaning they are now in their last degree to the Pole. With about ten days left in Winter, it looks like their goal is in sight, and they should arrive at their destination, barring any unforeseen issues along the way.

Of course, this wouldn’t be a “North Pole Winter” update without some notes on their continued suffering and struggles. It seems that their equipment is starting to break down on a regular basis and their diet of late has been mostly chocolate and lard. Considering they are burning 5500 calories a day, they have to consume plenty of both to keep moving. (Lard? Seriously??)

But, things have begun to look up in other areas as well. When they set out 80 days ago, the North Pole was already plunged into complete darkness, and they’ve spent the better part of three months traveling without seeing the Sun. But now, the dawn has broken, they’re able to travel without the use of headlamps for four hours a day

With less than 100km to go now, the conditions on the ice are said to be very good. They shouldn’t have to worry about open water any longer, and the ice pack should be solid, smooth and easy to break trail on, although the cold continues to eat at them with most days hovering around -42° C.

It’s beginning to look like these two amazing adventurers are going to reach their goal. It’s been a very long three months for them, and at times it seems like they suffered like no men should ever have to suffer. Hopefully they’ll reach the Pole safe and sound. And when the plane comes to pluck them from the Ice, I sure hope it flies non-stop to Tahiti or Hawaii or any place warm and tropical. These guys are going to need to sit in the sun and thaw out for awhile.

3 thoughts on “North Pole Winter Update: The Pole Is In Sight!”