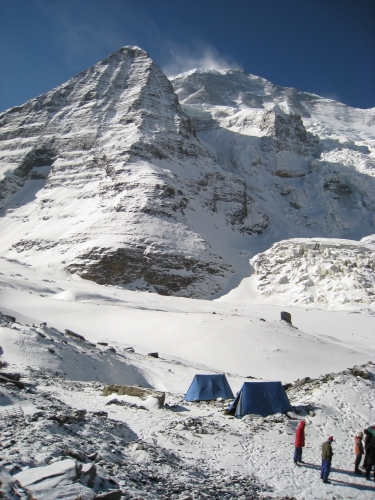 As a reminder that not everything happening in the Himalaya revolves around Everest and the fiasco that is the 2008 season, we have word on a couple of summits in the region.

First, the Hardwear Sessions Blog has posted an update on Ueli Stick who, along with is his climbing partner Simon Anthamatten, have completed the first ascent of the North Face of Tengkampoche, a 6500m peak located in the Khumbu Valley. The pair topped out last Thursday, and did so in alpine style. Ueli says that they didn’t use any bolts or fixed ropes on their climb and reached the summit in just four days.

Their season isn’t over yet however, as now Simon and Ueli will head back to Kathmandu for a bit of rest before hopping a flight out to Pokhara, where they’ll begin their “real” climb. Tengkampoche was just an acclimatization run before they turn their sites on Annapurna, one of the most challenging mountains in the world.

Meanwhile, Everest News has word of the first 8000m summit of the season, which was accomplished by Martin Minarik who went up Dhaulagiri solo last week. Martin topped out, in unsupported fashion no less, on Wednesday the 23rd, and safely descend back to BC the next day.

Congrats to Martin, Ueli, and Simon. Well done boys. Now go take care of Annapurna while you’re at it.