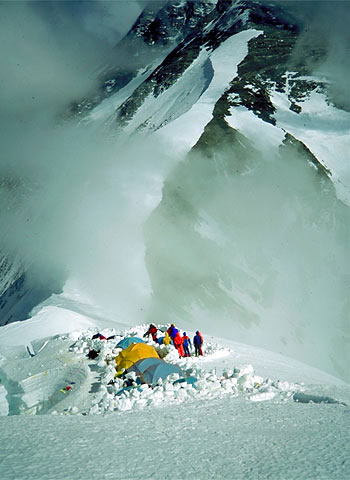 Annapurna isn’t the only mountain registering a death today. Word has come down that Swiss climber Uwe Gianni Goltz died on Everest two days ago of physical exhaustion. He had climbed high, but hadn’t quite reached Camp 4 when he passed away. He was attempting to summit without supplemental oxygen. His death has been confirmed by his team as well. Once again, my sincere condolences to his friends and family.

Despite the sad news from the Himalaya today, the summits continue on the highest mountain on Earth. Everest News is reporting that the Indian Army expedition has put 20 climbers on top and the IMG Team reports that their third team has summitted and that Team 4 is now in place to do the same.

The Everest Challenge Team has posted a new update indicating that they are in the final hours before their final push to the summit. They’re all in Camp 4 now, including Sir Ranulph Fiennes who is reportedly eating and drinking “loads” at C4 and is strong and ready to go up to the top. This is, of course, the team that is climbing to raise funds for the Marie Curie Fund which aids in cancer research and providing support for those afflicted by the disease.

Word from the mountain has been that their have been large crowds on the upper portions of Everest, near the Hillary Step and the South Summit. This has made for delays and has caused some to turn back. But the weather is holding out, and the window looks to remain open for the next few days, so I suspect that everyone will get a crack at the summit who is healthy and strong enough to go up.

Despite the death of the Swiss climber, it’s been a relatively calm year on Everest. Lets hope it stays that way.