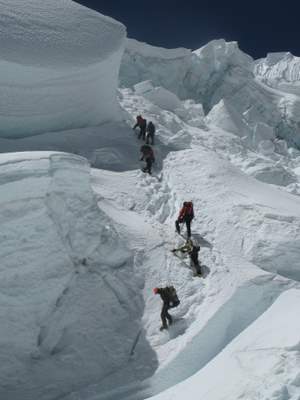 Great news this morning, as Nepal has already lifted the restrictions on the South Side allowing teams to climb up beyond C2 at long last, and reopening communications from the mountain.

Case in point, Alan Arnette has already sent a fresh dispatch from the mountain. This is the first direct news we’ve had from him since communications were cut off a few weeks back, and he reports that his team is doing well, everyone is healthy, and ready to go. Alan has been at 17,500 feet for more than 30 days, and says that he feels more than acclimatized and ready to move up.

The plan now is for the team to move up to C3, having already spent time at both Camps 1 and 2. If all goes according to plan, and everyone is feeling healthy, they’ll continue on to the summit from there. Alan’s dispatch describes the location of each camp and what the conditions are like there. He also estimates that there are about 500 climbers on the mountain’s South Side. 41 teams spread out over 31 permits. Hopefully the weather will hold and there will be plenty of time for each and every one of them to make their way up the mountain.

Remember, Alan is climbing to raise awareness and money for the Cure Alzheimer’s Fund. If you haven’t donated yet, it’s a great cause, and one that is important to a lot of people. A number of climbers were hoping to use Everest to raise awareness for their charities this year, but the Chinese have made that very difficult as well. It’s not too late to help them out however, and every little bit counts.

I imagine we’ll see quite a few new dispatches today, including some from climbers like Alan who we haven’t heard from in a few weeks. I’d guess that there are many who are eager to tell their tales of this strange year on Everest, but the real story probably won’t come out for weeks yet.

Hold on to your hats everyone. I think we’re in for a very busy week ahead, as these climbers are finally let off the leash and allowed to do what they came to Everest to do. Good luck everyone! Climb safe!