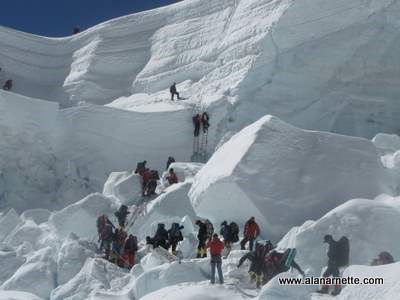 With the communications ban lifted, we’ve finally started to hear more from Everest this past week. The May 8th summit by the Chinese caught a few off guard, and some had to scramble back to base camp after having gone down the Khumbu Valley for a few days of relaxation in one of the small villages there. Now that it’s back to business as usual on the world’s tallest mountain, we at last have some idea on when we can expect to see some summits.

The Peak Freaks Team have posted that they have climbed up to C2, where they’ve been resting for a day or two, and intend to go up to C3 first thing tomorrow morning. They intend to spend one night at C3, then retreat to either C2 or base camp, depending on how they feel. They’ll begin their summit push on May 17th, this coming Saturday, if the weather holds and everything goes as expected. The Peak Freaks were the first team in BC at the start of the season, but by now I’m guessing that everyone is pretty much on equal footing when it comes to acclimatization and preparedness, so you can guess that there are a number of teams on this schedule. Expect to start seeing summits as early as next weekend!

Sir Ranulph Fiennes and the rest of the Everest Challenge Team are already in C3 according to their latest dispatch. The reached C2 on Saturday and endured a night of heavy snow fall before making their push to the higher camp. They’ll like spend the night there today before proceeding back down. Everyone is reportedly in good health, and feeling fine. Tomorrow they’ll descend to BC, which they note is presently empty, and wait for their weather window.

Alan Arnette is telling a very similar story to the ones above in his latest dispatches as well. He arrived in C3 yesterday, doing so in his best time and condition ever. This is Alan’s third trip to Everest, and it would be his first successful summit. But this time, he climbs with a purpose as he has worked for more than a year to raise awareness and funds for the Cure Alzheimer’s Fund. The year of preparation seems to have served him well, as Alan as been consistently upbeat and very positive in his written and audio dispatches. He did note that the traffic on the Lhotse face was quite bad on his way up, but while he waited for his turn past one of the bottlenecks, he caught great views of the Yellow Band and Geneva Spur above the team. He estimates that they’ll be climbing those spots in another 10-12 days, which gives you an idea of his teams schedule for making their summit bid as well.

Speaking of Lhotse, the climbers on that peak have been effected by the BC veil of silence as well, and we’re finally beginning to hear about their climbs too. Remember, Everest and Lhotse climbers share the same base camp and the first three camps up the mountain before they part ways.

Brian Oestrike is on Lhotse, climbing to test out some new gear for his sponsor Hypoxico Altitude Training Systems. His dispatches have begun flowing again since the Chinese summit as well. Brian is currently making his way to C2, where he’ll spend 4-5 nights in his acclimatization process before moving up to C3, then proceed up to C4 just long enough to turn around and head back to C3 for a night. After that, he’ll descend all the way to Deboche where he’ll rest for a few days, then begin his summit push. The Sherpas expect to have the ropes fixed to the summit by the end of this week.

There you have it. I guess we now have a rough idea of when we can expect teams to begin summitting. It won’t be long now as long as the predicted weather window opens as expected later in the week.