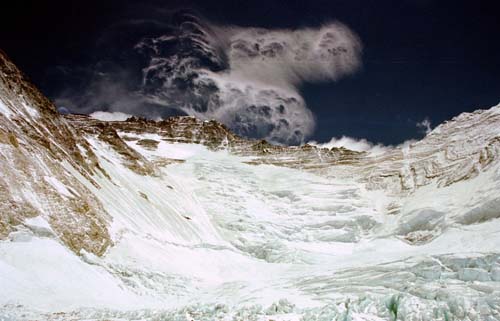 Things aren’t completely over on Everest, although nearly everyone has wrapped up their climb, and most are already back in Kathmandu or will be soon.

A few summit reports remain however, such as this one over at the Hardwear Sessions Blog where we get an excellent summit reprot from Team Marie Curie. The dispatch is written by team leader Kenton Cool, who gives a good account of their climb, and discusses how disappointed everyone was that Sir Randulph Fiennes was unable to continue up to the top. The team is back in Kathmandu already, but details of their experiences on the mountain are just now starting to creep out, although somethings remain cryptic. Kenton ends his dispatch with the following quote:

Emotions have run high for many reasons. Not least for a number of friends who have died this season. I’m happy that its all over now and I’m very much looking fwd to coming home and getting ready for the alpine season (which starts very soon!!).

ExWeb has posted a fresh update as well with news that the Brazilian Team has topped out, as has Mike Browder as part of the SummitClimb Team.

Finally, The Adventurist and Everest News are both reporting that while Browder may have reached the summit, there seems to have been some problems on his descent. Unconfirmed reports at this time have Mike suffering from snow blindness and having to be assisted down the mountain. He is reportedly back at the South Col not, but we’re still waiting for a fresh update. I’ll post more as we learn it.

The summits have slowed to a trickle and now the mountaineering world will turn to Denali and the Karakorum in the weeks ahead. Perhaps we’ll have some brave souls attempt Fall/Winter summits on Everest, but likely we’ve seen the mountain shut down for the year, as teams will already begin planning for 2009.