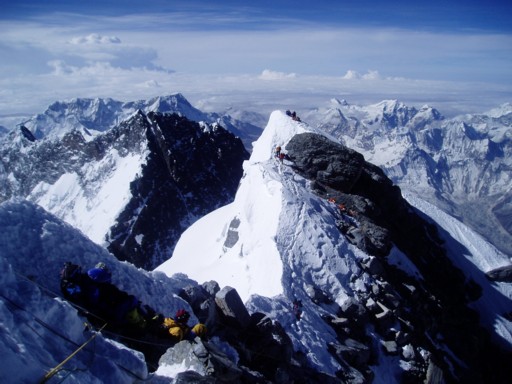 As you no doubt know by now, today was a busy day on Everest with a number of teams reaching the summit. Unfortunately, my “real” job took me out of town on arguably the biggest day of the year on the mountain, but a late update is better than no update at all, right?

Lets start with the Peak Freaks who posted a late dispatch of their own to let us know that six of their climbers reached the summit today, and most were back in C4 without incident. However, on the descent one of the climbers collapsed below the South Summit and was being roped down the mountain by several of the guides and Sherpas. At the time of the posting, they were confident that he would be fine and that everything would be alright. I’m sure we’ll hear more on this story later.

ExWeb has posted one of their typically detailed updates with news on summits on Everest, Lhotse, and Makalu. They report that members of the Project Himalaya Team, as did members of the Cordoba Team, amongst others.

IMG has updated their dispatches with news that four of their team members summitted and have now returned to C4, while their second summit team is currently just below the South Summit, at 28,500 feet and will be moving up soon.

Finally, an update on Alan Arnette who it has been my privilege to follow this past year as he trained and prepared for his Road Back to Everest. Last night I received word from Alan’s wife Cathy that he had turned back at the Balcony, overcome by exhaustion. I have no doubt that Alan gave his best effort on this climb, and that it was with great reluctance that he turned back. But Everest is no place to take chance, as he well knows, and it’s more important to come back in one piece than to continue up to the summit. We’re all glad that he is safe and will be returning home soon, and I couldn’t be more proud of his efforts.