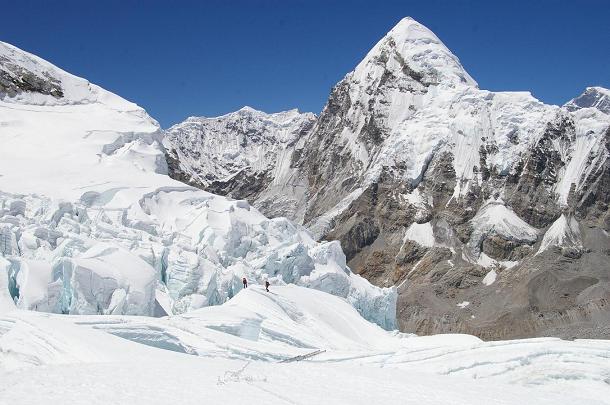 In today’s episode of “As Everest Turns”, we get more interesting news and speculation from the mountain. And I thought last year’s season of Everest: Beyond The Limit was a soap opera…

It was is probably the most interesting news of the day, The Peak Freaks are reporting that the Olympic Torch did indeed reach the summit yesterday, but the damn thing wouldn’t stay lit in high winds. So, while the Torch was there, the flame remained safely in Base Camp. It probably doesn’t want to be there any more than the foreign journalists, who are reported to be cold, sick, and uncomfortable. Perhaps the flame is staging it’s own “Free Tibet” protest.

Anyway, the story from the Peak Freaks dispatch is that yesterday a plane was circling the summit and it was believed that the plane was attempting to film the team on top with the torch in hand, but the high winds we reported on yesterday didn’t allow for it to blaze brightly as the Chinese would have wanted. So for now, the climbing ban on the South Side remains intact, and teams there will wait for their opportunity. If forecasts hold true, the next attempt could come this Saturday.

Peak Freaks are also reporting that a Chinese official appeared via helicopter in the South BC a few days back as well. The word is that he was there to insist a complete shutdown of the mountain between May 1st (today) and May 10th. The Nepali Major in charge at BC reportedly tried to negotiate on behalf of the climbers, but to no avail. So for the next ten days, each team is allowed only two Sherpas at C2 and they can only remain there for two days before they must rotate with another pair. (For what reason, I’m not sure). It’s also reported that anyone in BC who is not on a climbing permit has to leave until at least May 3rd. This means any trekkers in the region, but also some team leaders, who are not there to climb, but to handle logistics, and don’t put their name on the climbing permit so that they don’t take up a slot.

More craziness. A part of me wants to see the Chinese struggle until after May 10th, just to have this whole thing blow up in their face even more, as the fiasco that is the 2008 Everest Season would then be complete. But then again, another part of me wants to see every climber on the South Side get a fair shake at the summit. For them, the best thing would be for the Chinese to reach the top, smile for the camera, film the event, pat themselves on the back and parade around for the Wold, then get the hell out of everyone else’s way.

The next week or so is going to be very interesting. Thanks to Everest Is Ours for the tips.