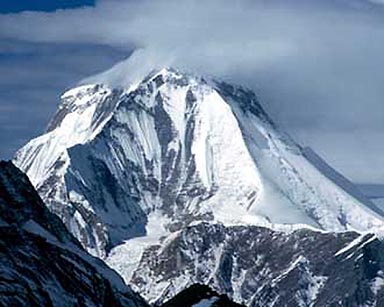 Both MountEverest.net and The Adventurist are reporting on a rash of successful summits today on Dhaulagiri, despite stormy conditions on the mountain. Teams are reporting that it has been very windy and cold near the summit, and late today a lightning storm moved into the area, which I’m sure had to make for a harrowing climb to the top.

ExWeb says they’re unsure of who has summitted thus far, but The Adventurist is reporting that the following climbers have confirmed to have topped out:

Of particular interest on this list is that Edurne Pasaban has topped out, earning her 10th 8000m peak. She, Gerlinde Kaltenbrunner, and Nives Meroi are in a mortal struggle to be the first woman to top out on all 14 of the 8-thousanders. The bad news for Edurne is that Gerlinde is also on Dhaulagiri, and may have reached the top today as well. It would be her 11th 8000m peak, but we’re still waiting on confirmation on that.

I’m sure we’ll get a complete list of summitteers soon, and a few stories of what it’s like at the top with lightning crashing around you. For now, lets hope everyone gets down safe, and congrats to everyone who stood on top.