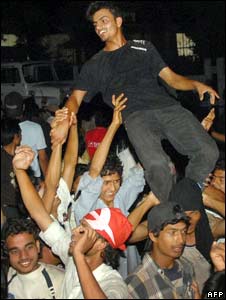 Nepal made another sweeping change in it’s government yesterday, as 240 years of monarchy has come to an end when a representative government voted overwhelming to abolish the King’s rule of the tiny Himalayan nation.

When elections were held last month, the Maoist party, largely made up of former rebels, became the leading political force in the country. Upon taking power, they made it clear that their number one goal was to remove King Gyanendra from power. When the vote was held yesterday, the results were 597-4 in favor of ending the monarchy. The former King now has two weeks to vacate his palace, which will be converted into a museum.

There was joyous celebration in the streets of Nepal upon the news. Gyanendra was not popular amongst the common citizens, and his 2005 move to consolidate power by abolishing the sitting government only made matters worse. It was seen as a power play to set himself up as the single authority in the country, but just one year later, he was forced to make concessions to the Maoist to bring them to the table for peace talks.

It’s unclear at this time as to what will become of the King. The Maoists and other members of the government are inviting him to stay in Nepal and live out his life as a private citizen, but seems likely that he’ll leave the country and live in exile elsewhere.

Today is also cause for celebration for another reason as well. It is the 55th anniversary of Sir Edmund Hillary and Tenzing Norgay reaching the summit of Mount Everest for the first time. The citizens of Nepal are celebrating the climbing of more than one mountain today.