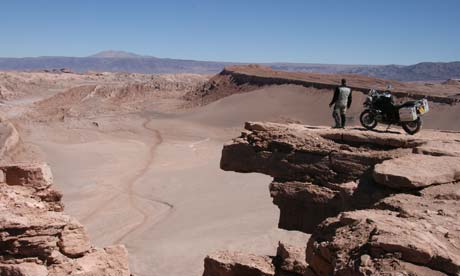 The Guardian has posted the first of a three part series by Mike Carter who set off to explore the Andes by motorcycle. Along the way, he cruised through Argentina, drinking in the scenery and keeping his eyes peeled for wayward vicuña.

Mike’s motorcycle adventure gets underway in a deserted, out of the way beach town, and wanders it’s way to the beginnings of the Atacama Desert. As he rides, wild condors soar over head, and packs of llamas graze near the road. He’s riding as part of the Globe Busters group who offer up motorcycle adventures all over the world. This one lasts five weeks and costs about £5,895 per person. That’s roughly $12,000 USD.

Seems like a pretty amazing trip. At one point in this article, the author remarks about how he stopped to take in the emptiness of the vast desert around him, and was overcome by the silence. Not a sound to be heard. He called it “the silence of earplugs”, which is a really interesting way of describing it.

The second part of the series will come tomorrow when the intrepid rider crosses the salt flats and heads towards the high Andes.