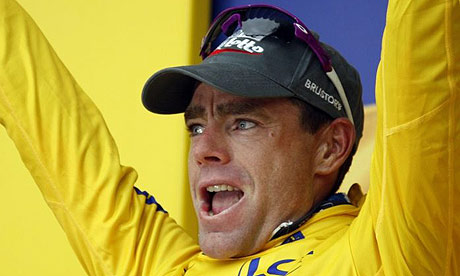 Today is the first schedule rest day on the Tour de France with the riders earning a much deserved rest after two punishing days in the Pyrenees. Yesterday they faced one of the toughest courses on this, or any tour, with two uncategorized climbs up the Tourmalet and then shortly there after, the even more challenging Hautacam.

At this point in the Tour, the Yellow Jersey is on the back of Australia’s Cadel Evans, who holds just a one second lead over Frank Schleck of Luxembourg, with American Christian Vandevelde who is 38 seconds behind the leader. The Green Jersey, given out to the points leader, generally a sprinter, is worn by Oscar Freiere of Spain, who has a total of 131 points, 7 more than Kim Kirchen, also of Luxembourg, who had been busy holding on to the Yellow Jersey until being dropped on the Hautacam yesterday. Italian Riccardo Ricco wears the Polka Dots of the King of the Mountain jersey at the moment with an 11 point lead over David De La Fuente of Spain. Ricco also has the White Jersey, traditionally given out to the best young rider.

When the le Tour resumes tomorrow it’ll be a less demanding ride through the foothills of the Pyrenees running from Lannemezan to Foix, a distance of 167.5 km (104 miles). While not as physically grueling however, riders will have to be on their game, as the road will be fast with a lot of tight curves. Should make for a fun day to watch the sprinters do their thing.