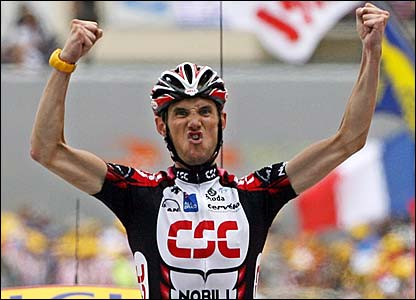 The second, and final, rest day of the 2008 Tour de France comes after an intense and punishing Stage 15 in the Alps that saw Andy Schleck of Team CSC pull his big brother Frank up the mountains in the 183 km (114 mile) stage to put him in the Yellow Jersey for the first time.

Sunday’s course ran from Embrun to Prato Nevoso as the riders moved into their second round of mountain stages where it’s expected that the top riders will finally push one another for the leader’s jersey. Heading into the stage, Australia’s Cadel Evans led the peloton, but Frank Schleck, a native of Luxembourg, was just one second back. Schleck let his team do the work for him as long as he could, but near the end a group of about 10 riders broke away to make a move towards the finish line. Included in that group were Schleck, Evans, Carlos Sastre, Bernhard Kohl, Alejandro Valverde and Denis Menchov. Schleck moved to the front with Evans close behind, but Frank managed to drop the Yellow Jersey and put eight seconds on him in an exciting dash to the end that put Schleck out in front of the Tour and saw Evans drop to third place, a second behind Bernhard Kohl of Austria, who now holds second place.

Yesterday’s stage was one of the best that you would see anywhere and it’s days like those that remind you why you enjoy the sport. The mountains always add a new element to cycling, and and the team work and sportsmanship that was displayed in Stage 15 are shining examples of everything that you hope to see in the Tour. It almost makes you forget about all the doping scandals that continue to surround the event.

Tomorrow the Tour will resume with a 157 km (97 mile) run from Cuneo to Jausiers that will see the riders slogging up two uncategorized climbs in the Col de la Lombarde and the Col de la Bonnette, which is the highest pass in Europe at over 2800m. The climbs will once again challenge the top riders, who will probably remain close to one another before topping out on the last climb, and screaming down the descent on the other side towards the finish line.

As close as the race has been thus far, I believe it’ll probably come down to the final individual time trial this Saturday, before the ceremonial ride into Paris on Sunday. Should be a fun week to watch.