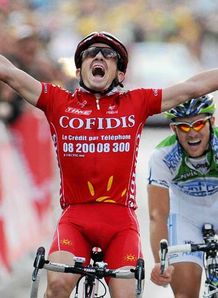 Today was the third stage of Le Tour and it was a big day for the French, as Samuel Dumoulin claimed the stage win, but more importantly fellow Frenchman Romain Feillu finished third, and claimed the Yellow Jersey for the host country.

Spaniard Alejandro Valverde had been in Yellow since winning the first stage of the race over the weekend, but a host of riders were just one second behind, and within easy striking distance. He finished two minutes back, as part of the main peloton, as a group of sprint specialists made their move to win the day. It was Dumoulin’s first ever stage win at the Tour, with American rider William Frischkorn taking second, just a tad faster to the line then Feillu, who finished third.

Today’s stage had riders racing from Saint-Malo to Nantes, a distance of 208km (129 miles) over mostly straight, and flat, conditions. That made it an opportune day for the sprinters to go after points and make their move for a stage win, which will be harder to come by when the race moves into the mountains.

Feillu is not considered a threat to win the 2008 Tour, where Valverde is still amongst the favorites. He fell back to fourth place in the overall standings with Italian Paolo Longo Borghini moving up to second, and Frischkorn holding down third.

Tomorrow brings the first individual time trial, which will give the sprinters even more of a chance to show their speed. The 29.5km (18 mile) stage begins and ends in the French town of Cholet.