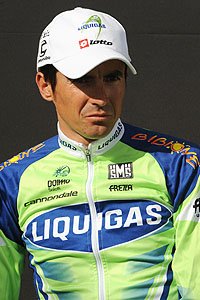 Ok, so I knew that this year’s Tour was going way too well. We had four riders wear Yellow in the first week, the race was fast and furious the first few days only to ride into the mountains yesterday, and a host of new, young, riders were controlling the pace so far. So what could possibly put a wrinkle in this year’s tour? Why someone testing positive for EPO of course!

According to this article over at ESPN.com Manuel Beltran of Spain has been tossed from the tour after a positive test for EPO, the blood doping agent that promotes the building of red blood cells, there by increasing the oxygen available to someone in a high aerobic activity. Like cycling.

This news over shadows todays Stage 7 which saw Luis-Leon Sanchez, also of Spain, take the stage win, while Kim Kirchen of Luxembourg remain in the Yellow Jersey for a second straight day. Even though today’s ride was through the Massif Central mountains once again, the top riders stayed close to one another, with no one making a major move.

Tomorrow we leave the Massif Central behind with a 172.5 km (107 mile) run from Figeac to Toulouse that will once again favor the sprinters. This stage is gateway to the Pyrenees, which will arrive on Sunday. Those big mountains will no doubt offer the first real glimpse into the rider most likely to take control of the race. The Massif was a warm-up, the Pyrenees is the real deal.