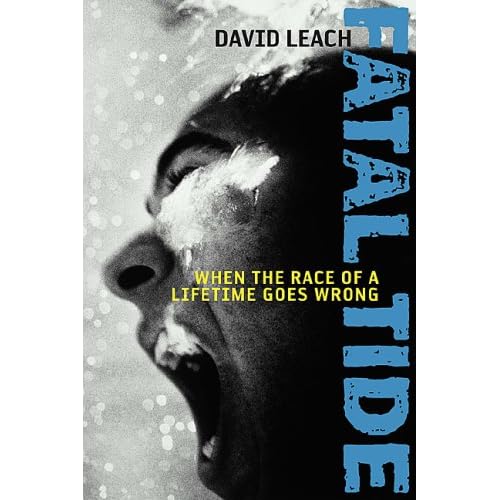 Adventure racing is a demanding sport. Competitors know that going in as they challenge themselves against the other racers and the course itself. The traditional AR disciplines of trail running, mountain biking, and padding have inherent dangers, and when you combine them in a sport like adventure race, occasionally people get hurt, and while it doesn’t happen often, sometimes people die.

One such incident is the subject of the book Fatal Tide by David Leach. Back in June of 2002, an adventure race called the Fundy Multi-Sport Race was held in Staint John New Brunswick, Canada. It was an event designed for beginners and meant to be an introduction to the sport, with solo racers expecting to compete in a “sprint” race meant to last about eight hours.

Most of the 68 competitors were out for a good time. They were a mix of local triathletes, casual runners, and armchair adventurers, each wanting to give this new sport a try.

The course was designed to wind it’s way through Saint John, beginning with a 15 km trail run, followed by a 40 km mountain bike ride, with a 12 km paddle capping the day. That last leg of the race was across the famed Bay of Fundy, which is renowned for having some of the biggest tides in the world, matched up with crazy Atlantic storms.

When the racers set off that day, it was a clear and calm morning. The perfect way to start off a day of active, outdoor adventures. By the time the lead racers reached the kayaking segment, the weather was beginning to shift, with the infamous Bay starting to brew up one of it’s equally infamous storms.

When the rank-and-file racers back in the pack set out onto the water, the fickle weather turned for the worse, catching them in their tiny kayaks far from shore. As a result, a young local racer named Rene Arseneault had his kayak rolled, depositing him in the icy water of the Bay.

Eventually, Arseneault crawled out of the water and onto another racer’s kayak. Both men were later pulled from the choppy, heaving water by a lobster boat, where the crew rendered aid, and made way for the harbor as fast as they could. Unfortunately, Arseneault had spent too much time in the cold water, and he would later succumb to hypothermia, becoming one of the first athletes to die as a result of injuries suffered in an adventure race.

Fatal Tide tells the story of that fateful day in a very straight forward, and journalistic manner. The events leading up to, during, and following the race are all laid out in great detail, with the story unfolding in a dramatic and compelling fashion that draws readers in and keeps the pages turning.

The first few chapters of the book are dedicated to introducing the key players in the race, including Jayme Frank and Sara Vlug, the co-directors of the race, several of the competitors, and of course Arseneault himself.

These profiles help us to understand these people before we ever get into the heart of the story, and it gives a more personal edge to the events that unfold later. One other early chapter gives a brief history of adventure racing, and it’s growth as a sport, giving Mark Burnett of Eco-Challenge fame much of the credit for popularizing it.

The bulk of the rest of the book is dedicated to taking us through the race in a detailed fashion and the controversy that followed it, in which Frank and Vlug came under fire for their planning of the event, and for decisions made while the race ws underway and the bad weather was moving in.

An inquest followed the accident, and many people weighed in on the tragedy. Leach also gives a stunningly descriptive explanation on hypothermia and it’s effects on the body that will have you chilled to the bone, no matter how warm it is when you’re reading.

Fatal Tide is available through Amazon.com, and I recommend it to fans of adventure racing and other endurance sports quite highly. I wasn’t aware of this accident before I read the book, but it made me stop and think about dangers of the sport and other activities that we take part in.

The book is a classic example of excellent journalistic writing, with Leach conducting extensive research and taking a dispassionate approach to his narrative in order to get the story out. His writing is tight and efficient, and conveys the weight of the story very well. He’s weaved together a tale that is equal parts adventure, sports, and investigative journalism that will stay with you long after you’ve read it.