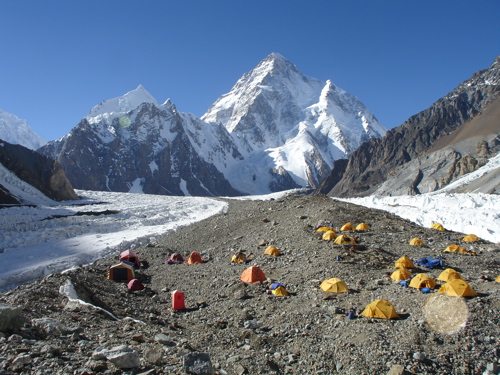 It’s been a couple of weeks since the tragic events on K2 gripped the mountaineering world. There have been various reports on those events in the mainstream press, with both the New York and LA TImes, amongst others, taking an ind epth look at what happened. Despite all the media attention however, I have said a number of times that the real story probably won’t come out for some time, until someone can take the time to look at the entire picture, interviewing the survivors, the support staff, and the search and rescue teams, and compiling everything into a more complete story.

Apparently I’m not the only one who feels that way, as Rock & Ice Magazine has posted a very interesting article on what we’re not reading in all of the reports on K2. Author Fredrick Wilkinson says that there has become an accepted story about what happened high on the slopes of the second tallest mountain on Earth, mostly due to the mainstream press reporting on the story. But he also says that there are some glaring questions that need to be answered, and details that need to be filled in.

For instance, we’ve been told that after the serac collapsed, the ropes were swept off the mountain at the Bottleneck, trapping climbers on the mountain. But he also notes that four climbers still managed to make their way down, despite the lack of ropes to guide them. While not completely unprecedented, it’s still an amazing feat. He also has questions as to who the Nepali and Pakistani climbers were who were killed on the mountain. They’ve been listed as “porters” or “guides”, but due to the general lack of technical climbing skill from these climbers, it’s rare to see them in the Karakorum. Furthermore, he calls into question a few discrepancies in Wilco van Rooijen’s reports from a recent interview.

The story definitely points out that there is a lot of confusion, even now, as to what happened on K2. Some of that is probably due to media outlets, who don’t normally cover mountaineering, over generalizing somewhat. Some of it comes down to just the pure chaos and confusion that comes from a life and death struggle in a remote place. I have a strange feeling though, that when someone does turn an inquisitive eye on these events, that there will be some controversy, not unlike what we saw on Everest in 1996.

3 thoughts on “What Really Happened on K2?”