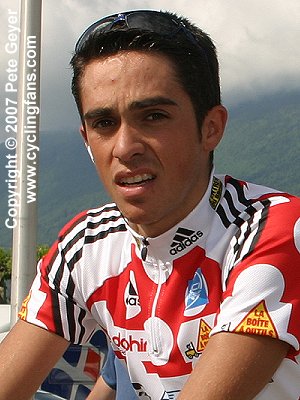 In the already on going soap opera that is the Astana cycling team, Alberto Contador has said that if he’s not the leader of Team Astana, that he’ll leave the team. Cycling’s best young rider was reacting to the news that Lance Armstrong would be joining his team upon his return to competitive cycling when he made those remarks.

Contador says that he has already spoken with Johan Bruyneel, the team’s manager, and has been assured that his leadership role is not in question, however he also notes that “Lance Armstrong is a champion and I think he will want to race to win, I am sure that he also wants to be the leader of the team.”

It should also be noted that Bruyneel and Armstrong are friends and have worked together in the past. Johan was the manager of the team when Lance won all seven of his previous Tour de France championships. I’m sure this is on Contador’s mind when he sees Bruyneel bringing in a close friend to the team, and that close friend happens to be one of the living legends of cycling.

Contador, who is well on his way to legendary status himself despite being just 25 years old, has said that he has already received offers from other teams inquiring about his services. He says that if he is not happy, he’ll leave the team and seek his fortunes elsewhere.

So? What’s a safe bet on how long it’ll be before Contador moves on? I’m not sure how he and Lance can co-exist on a team together any more, and Astana seems to have charted a path with Lance. The problem is, from a management point of view, you could have many years of production out of Contador, while Lance is a splashy headline for now, but he’s likely to retire again in a year or two at most. It’s a bit like the New England Patriots getting rid of Tom Brady to bring in Brett Favre.