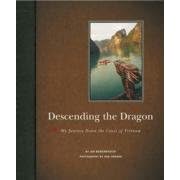 My bookshelf has been over flowing recently with all kinds of great adventure books to review, but unfortunately time has also been a bit of a commodity lately as well, which has left me far behind on the books that I want to share with everyone. I have started to catch-up at long last, and the first book I wanted to talk about is Descending the Dragon: My Journey Down the Coast of Vietnam by Jon Bowermaster.

I’ve posted on Jon and his Ocean’s 8 Project a number of times in the past. He’s a National Geographic sponsored explorer who has explored the world in the cockpit of a kayak. Jon has visited some very remote places, including Tasmania, the Aleutian Islands, and Antarctica, in order to gauge the healthy of the world’s oceans and the impact of global climate change on the environments there.

Back in 2001, Bowermaster and a group of five adventurers, along with their government assigned “monitors”, set out to explore 800 miles of Vietnamese coastline. Their experiences there form the the basis of Descending The Dragon, which is rich with tales about the people that inhabit more than 800 miles of coastline in a country that remains largely a mystery to the West.

The book is broken into chapters that correspond to geographic regions. The early chapters begin in the northern region and as you advance through the book, the chapters proceed south along with Jon and his crew. In the Introduction, Bowermaster discusses how he wanted to visit Vietnam to shatter the images he had of the country, mostly shaped by pre-1975 images of the American war there. Following that war, the nation was closed off to the west for years, and those old images continued to pervade popular culture and collective thought.

Next, the book proceeds to the Prologue that details some of the many bureaucratic hoops the team had to leap through in order to get the approval for the journey. The first response to their inquiries was that it would be “quite impossible”. But perseverance payed off and eventually they had all the permits and documents they would need to proceed, including a visa for Ngan Nguyen, a Vietnamese national who left the country when she was three, but has returned many times. She speaks the language very well, and served as a guide and translator for the expedition.

From there, the book proceeds into the meat of the story, with the chapters based on the various regions taking center stage. The journey beings in Hanoi, a chaotic and lively city that hasn’t yet succumbed to the upward growth of many of the modern Asian cities. From there, the team dropped their kayaks in the water at Ha Long Bay, and proceed south, eventually reaching China Beach and Hoi An. Along the way, they had an up close, and very personal, experience with the people who inhabit those coastlines.

The book notes that roughly 85 million people live along Vietnam’s coastlines. That’s about one third of their total population. During their two month journey, John and his team met literally thousands of those people from all walks of life. Some of the places they visited weren’t reachable by land, and seldom saw outsiders at all, and often Jon and the team saw themselves as ambassadors to those remote places, seldom seen by westerners.

As I continued to read the book, I began to see that this wasn’t just about a kayaking adventure to remote places, as I had anticipated before I cracked the cover, nor was it just a travelogue about journeying through Vietnam. Make no mistake, those are crucial elements to this book, but even more so, it’s about the people of Vietnam. The incredibly diverse, fascinating, and complex people of Vietnam.

Descending the Dragon is an incredibly fast read once you delve in. Bowermaster is a descriptive writer, who is as adept with a pen as he is with a paddle, and his writing really sets a scene. Whether it’s describing the crowded and hectic streets of Hanoi or the more sedate settings of a remote village, his words conjure vivid imagery that will have you turning the pages in rapid fashion. The stories of the places he encountered are compelling and the people that he found there even more so. At just 144 pages in length, the book is over far too fast, and leaves you wanting more.

I would be remiss if I didn’t mention two other great aspects of the book. First, is the photography, shot by Rob Howard. The book is filled with amazing photos from Vietnam, with stunning shots of the coastline and many of the places the team visited. Many of those shots are “slices of life”, capturing a moment in time that gives us a glimpse of what it’s like to live and work on those waterways. But even more impressive are the portraits peppered throughout the book of some of the people they met along the way. These portraits are brimming with life and are a perfect accompaniment to the text.

The other element I’d like to point out, is the wonderful quality of the book in general. While it is a trade paperback, it has all the other elements of a great coffee table book. The pages are thick and of a very high quality, which makes the already impressive photos jump off the page even more. Even the cover is not the standard paperback fair, with a slick, textured cover, that will remind you of a leather bound notebook. The kind you might use on your own travels to chronicle your personal adventures.

Descending The Dragon is a wonderful book that manages to not only inspire travel and adventure, but also gives a personal, human element to the journey. Bowermaster manages to deftly weave all of those elements together into a personal tale of discovery, that is both fascinating and enlightening at the same time. Perhaps the greatest compliment that I can give the book, is that it inspires me to want to visit these places and experience them for myself. Should you choose to read the book, I’d be willing to bet that you’d want to join me as well.