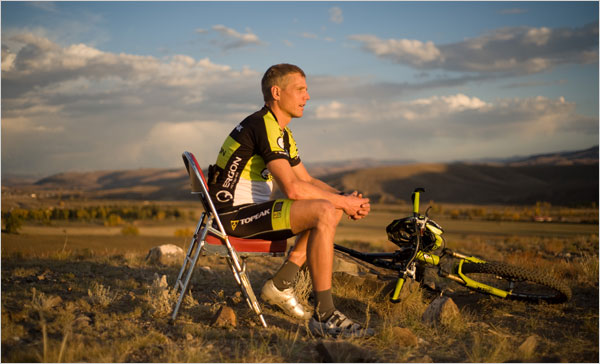 The New York Times has a great story today on Dave Wiens, the man who beat Lance Armstrong head-to-head in the Leadville 100 back in August.

The race received a good deal of attention, at least in mountain biking circles, because it would be Armstrong’s first organized competition since he retired from cycling three years ago. Granted, the Leadville, with it 100 miles long trail and dramatic elevations gains, was unlike any race that Lance had done before, but people had become so use to him dominating on the bike, that many took it as a foregone conclusion that he’d win. They couldn’t have been more wrong.

Wiens is a bit of a cycling legends himself, having won the Leadville six straight times, and holding the course record no less. He and Lance battled it out for much of the course, each taking their turn in front, but as they neared the end of the race, Lance told Dave to “Go” and that “he was done”, and Wiens rode on to claim the win and a a new course record. Lance rolled in about two minutes back, with the next competitor far behind.

Since that day, Lance has announced his return to competitive cycling and is said to be preparing for upcoming races, that will include the Giro this time, an amazing race that he’s never competed in before. Of course, this has put the spotlight squarely on Wiens as the man who beat the legend.

In the article he seems to take it all in stride. He comes across as very mild mannered, but also focused and very athletic. It’s a good read and a fine example of an “everyday athlete” who is amazingly talented but still has a full life in other areas as well.

Thanks to the Outside Blog for the tip on this one.

3 thoughts on “The Man Who Beat Lance”