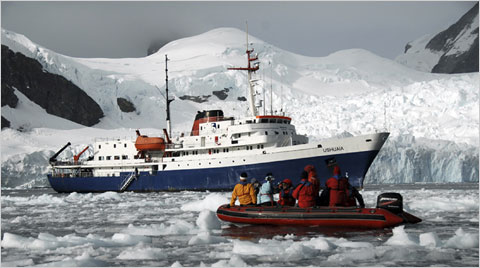 A little more than a year since the MV Explorer sank off the coast of Antarctica, another ship is now in trouble in the same region. According to this report, the MV Ushuaia has run aground near the entrance of Wilhelmina Bay, near Cape Anna.

Preliminary reports are that no one has been hurt, but the passengers have been evacuated as a precautionary measure, while the damage is assessed, and a plan of action is put into place. Measures will also be taken to limit the impact on the fragile environment of the region as well.

The first ship on the scene was the MV Antarctic Dream, but wouldn’t you know that the National Geographic Explorer was once again close by, with Jon Bowermaster on board. Jon has apparently been in touch with the Dot Earth Blog at the New York Times, and is sending them updates via e-mail on the situation, and keeping them appraised of the situation. You can read the updates here.

Thankfully no one was hurt and it seems like there is no immediate emergency. But this incident will once again call into question the increased traffic in the waters surrounding Antarctica and the growing adventure tourism trade to that continent. We’re also continuing to play with fire. Last year no one was hurt and it seems the same can be said this year as well. But one of these times we might not be so lucky, and lives could be lost.

I’ll post updates on the situation as more becomes known.

5 thoughts on “Another Antarctic Ship In Trouble!”