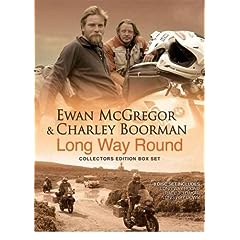 The holidays are nearly upon us, with just a few short shopping days left. Are you still looking for a great gift for the adventurer on your list?? Then check out this great deal over at Amazon.com.

Fans of the television show Long Way Round and Long Way Down are going to love this DVD set, which includes not only both of those series, but also Charley Boorman’s Race To Dakar. In all, it’s 8 DVD’s full of amazing travel video, totaling up to more than 10 hours of adventure.

For those that aren’t familiar with the show, Long Way Round had Charley and his best friend Ewan McGregor setting off from London to ride their motorcycles around the world, while Long Way Down has the the same duo riding from the northernmost region of Scotland to the tip of South Africa. Before they ever set out however, Charley was already an experienced off road motorcyclist, and he took those skills to the desert to race the Dakar Rally.

At just $37.49, it’s hard to pass up on a deal like this, and judging from the fact that it won’t ship for 1-3 weeks, it looks like plenty of other people are grabbing it as well. As a big fan of both shows, I can tell you that this is a steal, and getting the Dakar footage is just icing on the cake.

Thanks to regular reader Carl for sending this tip my way.