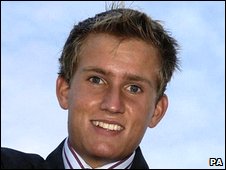 I’ve been away from the Internet for most of the day today, but just came home to find out that Rob Gauntlett, the youngest Brit to top out on Everest, has died in the Alps today. He was just 21 years old.

According to the BBC article I linked to above, a spokesman has confirmed that Gauntlett, along with another climber, have fallen in the French Alps, and have perished. The details are a bit sketchy at the moment, but we do know that Rob, and is as of yet unnamed friend, arrived in the region just after the new year, and were ice climbing near Chamonix, when they took what has been called a “big fall”.

Gauntlett was recently the recipient of the National Geographic Adventurer of the Year award after he, and James Hooper, completed an epic journey from the North to the South Pole. Following that adventure, they went on to sail 1800 miles to Australia as well.

My condolences go out to both men’s families. Our thoughts are with you today.

Thanks to Jo Adams for bringing this to my attention.

5 thoughts on “Breaking News: <i>National Geographic</i> Adventurer of the Year Dies In the Alps”