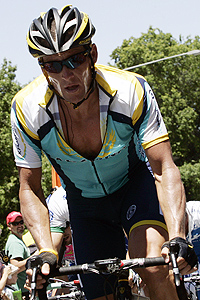 The heat in Australia dissipated a bit today as the second stage of the Tour Down Under went off without a hitch. It was a relatively fast stage, but more difficult than yesterday and considered to be the second most difficult leg of this year’s event.

In the end, the stage was won by Australian rider Allan Davis, who also moved into the overall lead with his break away performance with about 500 meters to go. He was followed closely by fellow countryman Graeme Brown and Swiss rider Martin Elmiger. Lance Armstrong finished 45th on the day amongst a group of riders 13 seconds off the pace.

Lance did show flashes of his earlier form however, participating in two breakaways, one with Australian rider Jack Bobridge, who is half his age. Yesterday, Lance posted a tweet to his twitter feed saying that Bobridge was a young rider we should all keep an eye on in the future.

The seven-time Tour de France winner told ESPN that he was having a great time riding in the race, and that he felt good, with strong legs. He also said that he knew it would take some time before he would be ready to leading an event like this one, but that it felt great racing at the front of the Peloton as he did for parts of Stage 2.

You can read more about today’s events over at Velo News.