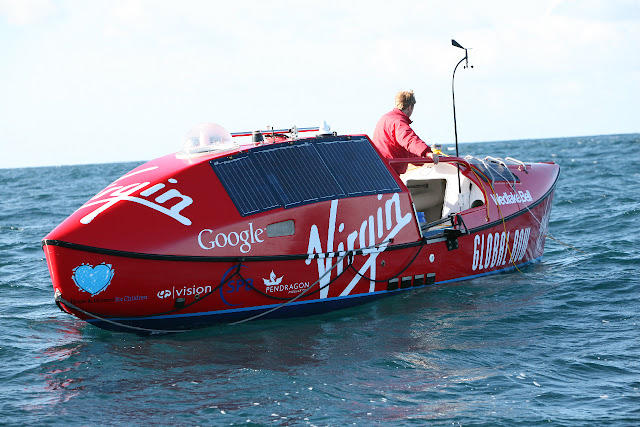 I’ve mentioned the Virgin Global Row a couple of times in the past month, as British adventurer Olly Hicks prepared to make his epic solo, unassisted row around Antarctica. Unfortunately, he ran into a snag a few weeks back when New Zealand refused to allow him to set out from their shores for fear of him running into trouble and requiring a rescue in the dangerous waters of the Southern Ocean. Olly made a quick change of plans and headed for Tasmania for his launch.

It seems that at long last, the Global Row is officially underway with, the 24-year Hicks setting out from Hobart, Tasmania last Friday at 3 PM local time to start his incredibly demanding journey. Ahead of him is more than 15,000 miles of open sea, 500 days of isolation, 50 foot waves, and untold hours of rowing his boat, dubbed The Flying Carrot.

The Virgin Global Row website is now fully active, and you can chart Olly’s progress on the front page. There is also a blog, that for now is strangely silent. You’ll also find information on the sponsors, and Olly himself.

I want to personally wish Olly all the luck in the world. He’s setting out on a very unique adventure. Rowing across an ocean is never a small feat, and requires incredible dedication and stamina. Rowing around the globe, at the 50º South mark, requires a lot of courage and desire as well. The Southern Ocean is a dangerous place, and where he’ll be, it may be impossible to conduct a rescue operation. Yet he chose to go anyway, carrying an adventurous spirit with him. Godspeed Olly!