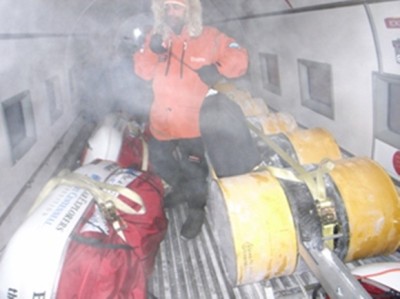 Lots of activity already underway up North. Teams have been dropped off on Ward Hunt Island, a traditional starting point for many heading to the North Pole from the Canadian side, and reports are already flowing in.

The Catlin Arctic Survey Team was off and running a few days ago, although they aren’t in any particular rush to get anywhere. They’ll be taking important radar surveys of the ice along their way to the North Pole to record the impact of global climate change on the Arctic. As for the health of the team, it’s “so far, so good” for most of them, although famed arctic explorer Pen Hadow did crack a tooth biting into a chocolate bar that was frozen solid. I don’t think he’s going to find a dentist anytime soon.

The team did experience a bit of a crazy moment already however. Yesterday they were camped for the night and taking some core samples of the ice, but around 10 PM, settled into their tent, they were a bit startled to find the ice shaking rather dramatically under them. That was enough to make them a bit unsettled, so they packed up their gear and skied another 2.5 hours to find a more stable area to rest for the night. Unstable ice is not uncommon for expeditions to the North Pole, but it’s certainly not something you want to ignore either. Between that, negative drift, and the polar bears, heading north can be quite a harrowing and frustrating experience.

Yesterday was also the first day out on the ice for Christina Franco, who was dropped off at Ward Hunt, where she was acclimatizing to the cold temperatures, which are reportedly hovering around the -45º C (-49º F). After covering a short distance, Christina set up camp and prepared for her first full day on the ice today, where she hopes to make some solid miles and get use to the rigors of pulling her sled in the actual arctic conditions. This is just the first step towards her goal of becoming the first woman to goal solo to the North Pole.

The Victorinox North Pole Team also hit Ward Hunt Island a few days back, and have begun their journey to the Pole as well. John Huston and Tyler Fish are hoping to become the first Americans to make that journey without assistance. As of now, they have covered 2.57 nautical miles, leaving them just 413 to go before they reach their destination.

One thing of note. When comparing the mileage numbers for the North Pole explorers to those of the South, remember that in Antarctica, the teams are actually on solid ground, which is not the case up north. Early mileage for the arctic teams will seem quite small at first, and progress will seem painfully slow, although they will pick up steam as they get further north. Part of the slow progress early on is due to the conditions of the ice, which can often be unsteady and make for large portions of open water that need to be navigated around or swum across. Negative drift doesn’t help the process either, as the ice will actually move the teams backwards at times or they’ll walk all day just to find that they haven’t really made any positive progress toward the Pole. It really is a completely different and unique experience.

The Peary Centennial Expedition was still in Resolute Bay as of yesterday, grounded by poor weather. They’re hoping that things will clear up today so they can make the flight to Ward Hunt as well. Reports are that there are a couple of other teams waiting to head out soon too.

Stay warm everyone. Watch out for those cuddly white bears!