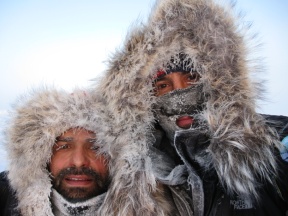 It has been another busy couple of days for the arctic teams, who continue moving forward, with reportedly warmer weather and overall better ice conditions.

The Victorinox North Pole Team consisting of American’s John Huston and Tyler Fish, posted another one of their weekly recaps a few days back with insights into the highs and lows of making an expedition to the North Pole. They talk about how excited they were to cross the 84º point last week, having made it in 18 days, right on their pre-expedition schedule. But since then, they feel like they are making slower time and covering less distance than they had hoped. The team felt like once they got passed 84º north they’d see an increase in speed, but that hasn’t materialized just yet. They also report that they came across tracks in the snow of a large polar bear and her cubs, but they were moving in the opposite direction, which made them feel a bit better about having the predators in the area.

The Catlin Arctic Survey Team welcomed spring in the Arctic, and are happy to have -24ºC days as opposed to those -40º days (-70º windchills) they had not so long ago. Expedition member Pen Hadow notes that while everyone trains very hard for their journey to the Pole, none of that training can prepare you for the real experience out on the ice, where it is colder, windier, and darker than you expect. Early on in these expeditions it’s dark for nearly 24 hours of the day. The team has now been out on the ice for nearly 24 days, and they estimate that they could be out for as much as 70 more, a reality that is just now sinking in, and making them realize how demanding their journey could be.

The Peary Centennial Team is also reportedly making progress and claim that they passed a few pleasant milestones in the past few days as well. For one, they actually say that the sleds are beginning to feel lighter, and not just because their supplies are dwindling. Improved ice conditions have made it easier to pull their gear, and the -10ºF that they first had over the weekend was a 40 degree swing in their favor, making it a more pleasant experience all around out on the ice.

Meanwhile, on Baffin Island, the Baffin Babes have finally dropped another dispatch, reporting a close encounter of their own with a young male polar bear. The bear was heading directly for them at one point, and they readied their flare guns and rifles just in case, but before he strayed too close, the big guy moved off in a different direction looking for something else to eat. The Babes moved forward after that, but were quite cautious for some time. They are more likely to encounter bears on Baffin than teams actually headed north, so they’re on alert at all times.

Finally, ExWeb sister site ThePoles.com is reporting that the Russians are now saying that Barneo Station is on track to open in early April, launching “last degree” expeditions from that side of the ice. Supplies have already begun to drop into the area, and a landing strip will be blown out of the ice shortly. Mi-8 “Hind” helicopters have already been sent to the region to look for stable ice on which to begin construction of the base that rises and falls with each Arctic season.