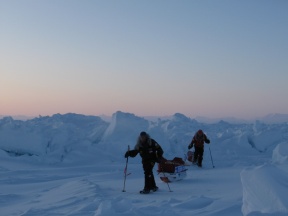 The Catlin Arctic Survey Team had a busy weekend, continuing their survey of the health of the Arctic ice, that will eventually culminate with their arrival at the North Pole. Team member Martin Hartley has struggled over the past few days though, first developing a nasty blister, which subsequently burst, which didn’t really help matters either. Martin has had to stop every few hours to clean and dress the blister, which, has Pen Hadow points out, isn’t very easy at -34º temperatures. The team is nearing their first resupply point as well, but the trouble is that at this moment, the supplies aren’t there yet. The home team put together everything they would need and found a suitable landing zone, but the weather has not been cooperative the past few days, and for now the supplies are still in Resolute Bay. If that wasn’t enough of a concern, late last week the team came across fresh polar bear tracks as well, which has put them on the alert. One of the major differences between the Arctic and the Antarctic, is that down South, the penguins don’t stalk you.

Meanwhile, the Victorinox North Pole expedition continues to make good progress, and according to their week in review audio dispatch, they have now put the mountains of Northern Canada and Ward Hunt Island well behind them. The peaks were once a constant fixture on the horizon but now there is nothing but the endless Arctic expanse. Their eyes are focused in front of them, always heading north now. They’ve had to deal with small amounts of rubble in the past few days, but nothing so daunting as early on in the journey, and now that they’ve been out on the ice for some time, they’ve fallen into a comfortable routine that gets them through the day.

In their latest dispatch, the Peary Centennial Expedition explains that rubble isn’t the only thing that can slow your progress. They note that the wind is almost constantly blowing from east to west, thus building snow drifts on the larger blocks of ice that populate the area. So while they zig-zag their way around that rubble, they also have to deal with nasty snowdrifts that really hamper progress and make for tough going. Despite those conditions however, the team is moving well, and making good positive progress toward the Pole. They also note that while the wind can be the enemy, it also bring some beautiful sights at times, such as snow particles getting caught in the suns rays and creating sun dogs.

Finally, the Baffin Babes are happy to finally be on their way and are sending back dispatches from the field as well. They report cold conditions of course, but after a few days out, they’ve found a rhythm and are making good progress at 5-10km per day. The girls are pulling their sleds but have a couple of dogs along to help as well, and are surrounded by beautiful snow covered fjords with the frozen sea on the horizon to the east.