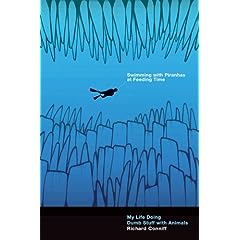 As I noted last week, traveling is a perfect time for catching up on your reading. Long flights and layovers in spartan airports with little to do, makes you appreciate a good book all the more. And when heading to South America, I just had to take along a book I had received a few days before departing. I mean, it’s called Swimming with Piranhas at Feeding Time by Richard Conniff. How could I possibly leave that behind when I was headed to the Amazon?

Much like Jon Bowermaster’s new book, Wildebeest in a Rainstorm, which I reviewed last week, this book is a collection of articles that the author has written over a number of years. Conniff has extensive experiencing traveling the globe and writing about its creatures, both great and small.

The stories in the book range from trailing wild dogs on Botswana’s Okavango Delta to the title adventure, in which Conniff decides to take a dip in a tank full of Piranhas at the Dallas aquarium. In between, you’ll learn a lot about bugs, including the level of pain they inflict when they bit or sting, as well as far more than you’d ever wanted to know about their sex lives. There are stories about elusive leopards, cheetahs, humming birds, monkeys, and more.

The books is a fast read, as each of the chapters is a self contained story, and Conniff’s writing style is not only interesting, but often humorous as well. I often found myself wrapping up one of the stories and plunging headlong into the next, just to see what new topic he would explore next. And while I was fascinated reading about his adventures tracking leopards in Namibia with the !Kung San, perhaps the greatest trackers in the world, I was equally enthralled with his report on Lemurs in Madagascar and his profile of Justin Schmidt, an entomologist who has devised a scale for measure the pain of an insect bit or sting. The scale ranges from one, described as “a tiny spark”, to four, which is “absolutely debilitating”.

Through it all, it’s clear that Conniff loves what he does, and has enjoyed a long, and stored career covering amazing wildlife in every corner of the planet. He has a passion for all of these creatures, not just the big cats and intelligent primates, but the little creepy crawlies as well, and it shows through in his articles, which are fun to read, but also very informative as well. I learned a lot from each of these articles, sometimes to my dismay. For instance, in the chapter on Schmidt’s pain scale, I learned that bullet ants, native to South America, get their name from the fact that when they bite you, it feels like you’ve been shot. As I lay in my bunk that night, aboard the river boat that was my home on the Amazon for my trip, I recalled how many of those ants I had seen that morning, while trekking in the jungle. I double checked my boots to make sure none came home with me.

Anyone who loves, or is even curious about, the animals and insects that we share this planet with will enjoy this book. It’ll make you laugh, but it’ll also make you marvel at the incredible diversity of life and its amazing resiliency. So many stories to be told, and Conniff is one of the best at telling them.

4 thoughts on “Book Review: <i>Swimming with Piranhas at Feeding Time</i>”