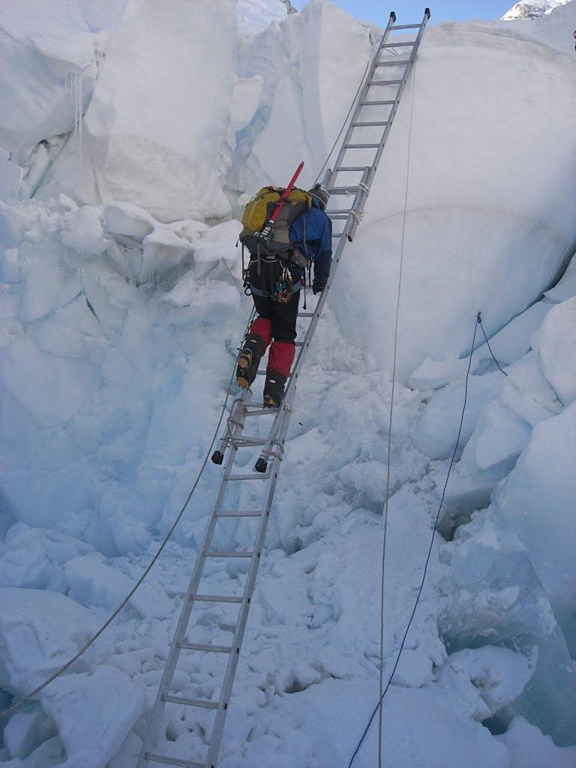 Lots of stuff happening in the Himalaya while I was off the grid. So hard to get caught up when you haven’t had Internet for days during one of the busiest times of the year in terms of adventure.

First up, by condolences go out to the friends and family of Piotr Morawski, the young climber from Poland who, at the age of 33, had already made quite a name for himself in the climbing community. I’m sure for most of you this is old news, considering he perished last week, but I’m still catching up, and this was sad news indeed. It seems Piotr fell while descending from Camp 2 on Dhaulagiri, and slipped into a crevasse. He had six 8000m peaks to his name, including the first winter ascent on Shisha Pangma with Simone Moro back in 2005.

In other news, it seems that the Ice Doctors have gone to work creating a path through the Khumbu Icefalls, allowing the climbers to make their first forays onto the upper portions of Everest. As you no doubt already know, the Icefall is part of the glacier that extends down the mountain, and is continually moving and shifting its position. This opens up large cracks and crevasses, and each year a new path through the region, the most deadly on the South Side, has to be built using a series of ladders, which are set down over the openings, allowing the mountaineers to pass by waking across, stepping on the rungs. Many say it is a scary portion of the climb, but it is done multiple times throughout the climb as the teams go up and down the mountain establishing their camps and acclimatizing. According to Alan Arnette’s Everest 2009 page, the first teams have moved through the early portions of the Icefall to get use to the process, which can be, in Alan’s words, intimidating.

ExWeb is also reporting that the Icefalls may be completely open as early as today, although some reports are indicating that the last 200 meters or so are giving them particular troubles. Once the route is finished, the teams will be free to begin establishing Camp I just on the other side of the Falls.

Alan also reports that many of the teams have now had their Puja ceremonies as well. The traditional religious ceremony is conducted for each team before they begin the climb up from base camp to show respect for the mountain and to ask for safe passage to the summit and back. For the Sherpas who are integral to any successful Himalayan climb, and for the experienced mountaineers who have climbed in the region in the past, it is a very important part of the process.

The action is heating up on some of the other peaks in the Himalaya as well, with ExWeb saying that teams have established C1 on Manaslu, where a Koren team is expected to make a summit push in just three days. I’m assuming that’s from a different route, or they’re going up in Alpine Style in a fast climb. Meanwhile, German Luis Stitzinger has announced that he intends to ski down Dhaulagiri from at least 8000m and possibly the entire mountain, depending on conditions. It would be the first ski descent of that mountain.

Finally, Joe Puryear and David Gottlieb have announced that hey will have a go at Lunag Ri, which they are calling “the highest unclimbed permissible and independent mountain in Nepal.” There are several mountains in the region that are higher, but are off limits, with no permits being issued, because of the religious significance of the places. It should be fun to follow their progress over the weeks ahead, as they go for the first ascent.