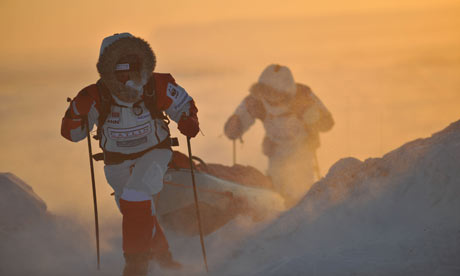 While the general attention of the adventure community has shifted over to Everest and the events going on in the Himalaya, the lonely polar explorers continue their long march to the top of the world, with their eyes clearly focused on the price, namely 90ºN!

Two teams are closing in on that mark, with both the Victorinox North Pole Team and the Peary Centennial Expedition both past 89º. The last update from Victorinox is three days old and has them at 88.48ºN, with 72 nautical miles to go until the reach the Pole. The team was knocking off chunks of mileage in the mid teens, so we can guesstimate that they’ll reach their destination as early as this weekend, as long as the weather holds and they don’t have to deal with too much open water.

Likewise, the Peary Expedition last reported in on the 19th, and they were past 89.11ºN. Their next update may very well be from the Pole itself, as they have also been making good time and should be very close now as well. It seems the next few days will be very exciting for everyone that has been following the North Pole Season this year.

The Catlin Arctic Survey Team has now been out on the ice for 52 days, and have already traveled more than 340 miles. The bad news is that they are estimated to still be more than 550 miles from the Pole. Remember, this team is not heading due North like some, but is instead taking ice samples to measure the healthy of the ice cap. While the teams mentioned above are nearing 90º, Pen, Martin, and Ann are still at 84º and taking their sweet time to enjoy the view. They are also reporting much more open water as spring begins to arrive at the North Pole, which makes things more treacherous and slows them down further.

Meanwhile, the Baffin Babes are continuing their expedition across Baffin Island. It has been a few days since we heard from them as well, and it sounds like it has been a challenging experience in a number of weighs. Their heavy sled is weighing in at about 120kg (roughly 265 pounds), and it sometimes takes all of their efforts, plus their two dogs, to keep it moving through the deep snow. To make matters worse, two of the girls have gotten ill while out on the trail, which has to make them feel absolutely miserable under these conditions. They have, however, reached Clyde River, and resupplied, and enjoyed some down time in town. They report great weather and absolutely stunning scenery on Baffin as well.

Finally, there have been no new dispatches from Christina Franco, who had set out from Barneo a few weeks back on a last degree journey to the North Pole. She was hoping to go solo from the Canadian side, but once her stove suffered a double failure, she was forced to give up that dream for this year, and instead elected to use this journey as a training session. She’ll attempt to go solo again next year. Without dispatches, it is difficult to know where she is at, at the Google Map on her website isn’t plotting the course either. Perhaps she’s still suffering equipment failures.