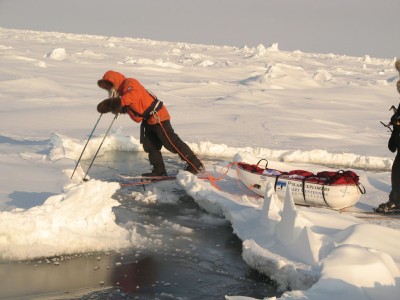 It was a big weekend at the top of the world, with two teams accomplishing their goal of reaching the North Pole, while the Barneo Ice Station closes for another season.

We’ll start with the Victorinox North Pole 09 Team, consisting of John Huston and Tyler Fish. The two Americans found themselves in a race against time this weekend in order to reach the North Pole and still catch the last plane out to Barneo Station, and then home. The deteriorating ice conditions at Barneo forced the closure of the Russian Base, which meant John and Tyler had to arrive at the Pole by yesterday morning. They worked overtime to get there, and made it, becoming the first American team to go unsupported to the Pole. Congrats guys!

The Peary Centennial Expedition also lists their current position as 90ºN, with team members Lonnie Dupre, Max Chaya, and Stuart Smith all arriving safely after 53 days on the ice, covering 650 miles in the process. The trio arrived on Saturday morning, giving themselves plenty of time to enjoy the view and reflect on their achievement before they too caught the plane to Barneo on Sunday. Congrats to the team for a job well done as well, and a second round of congratulations to Max, who has now reached the “Three Poles”, having been to both the North and South Pole and the summit of Everest. Well done Max!

The latest updates on Christina Franco’s page indicate that she is heading home as well. There aren’t a lot of details to be gathered from her posts just yet , but Christina was making a Last Degree journey to the Pole as a training exercise for next year’s attempt at a solo journey from the Canadian side of the ice. I’m sure we’ll hear more once she’s back in civilization, but it seems she accomplished her goal as well.

Meanwhile, the Catlin Arctic Survey Team seem unconcerned with how they plan to get off the ice. They’ve now been out for 57 days, and covered more than 230 miles, with another 340 to go before the get to the Pole. But they’re carrying sensitive scientific equipment along with them, including ground penetrating radar, and their goal has always been to gauge the healthy of the Polar ice, and determine the effects of global climate change on the region. From all accounts, that mission is going well, but they will be out there for awhile yet.

Finally, the Baffin Babes continue to struggle with illness on their journey across Baffin Island. After a brief respite on Saturday, in which they stayed in a “luxury camp”, they thought that they had recovered, but upon hitting the trail yesterday, two of the girls began to feel ill again. Their latest dispatch says that each of them has taken turns with this bout of illness, which includes vomiting and diarrhea, none of which sounds like very much fun when you’re also trekking across inhospitable terrain, dragging a heavy load, and it’s -30º outside. Good luck girls. Hope you’re feeling better soon.