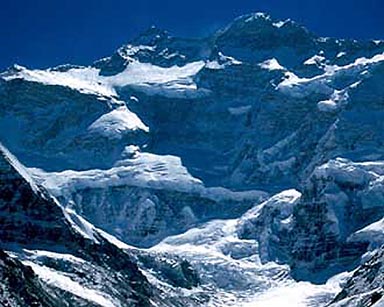 While Everest continues to dominate the headlines, there is, as always, a lot of action to be had elsewhere as well. And if conditions are right on Everest, that means they are probably great on Lhotse too. ExWeb is reporting that there have been a rash of summits on Lhotse, where highlights include Gerlinde Kaltenbrunn claiming her 12th 8000 meter peak. That draws her even with Edurne Pasaban, who summitted, and has struggled, on Kangchenjunga these past few days. More on that shortly. Congrats to Edurne for a job well done.

Congratulations are also in order for Ralf Dujmovvits as well. With his successful Lhotse summit, he now has reached the top of all 14 of the 8000 meter peaks as well, and adds his name to the list that was expanded to include Denis Urubko last week. Awesome news here as well.

Meanwhile, I’ve been reminded that Edurne, Gerlinde, and Nives Meroi aren’t the only girls in town. Polish climber Kinga Baranowska did her nations climbing heritage proud by topping out on Kangchenjunga a few days back as well. She was just a short time behind Edurne and reached the top without supplemental oxygen, claiming the fourth summit by a woman on that mountain. Very well done Kinga! She also dedicated the climb to the memory of Wanda Rutkiewicz, one of the greatest climbers, male or female, ever. Wanda is also from Poland, and lost her life on Kangchenjunga a number of years back.

Staying on Kangchenjunga, Nives Meroi was hoping to add her 12th 8-thousander summit to her resume as well, but turned back when husband Romano Benet took ill. Romano began showing the early signs of HACE and they thought it best to turn back. Nives says that no summit is more important to her than Romano, and they are back in BC at this time. No word if there will be another attempt yet this season.

While Edurne Pasaban may have claimed her summit on that mountain however, it sounds like she payed a healthy price for it. She finally made it back to BC today, even though her summit was three days back, and she is reportedly exhausted and suffering from frostbite in two of her toes and her thumb. She will reportedly be airlifted from BC tomorrow. Keep your fingers crossed that everything comes out okay.

Finally, the Ski the Himalaya team has posted another update on their website with news of a second summit bid by Josh and Ben. Earlier in the week the two men expended a lot of energy getting their third teammate, Jon Miller, of the mountain when he took ill, and it caught up with them a bit, with Josh hitting the wall on the second trip up. Without hesitation, they turned around and went back down, the expedition is over, and they’re heading home. While they did not reach the summit on Baruntse, they did make the first ski descnet of that mountain, and I know that they had a blast while they were there, summit or no. And that’s what mountaineering is all about. Great job guys!