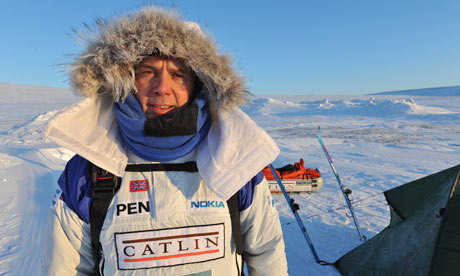 The Catlin Arctic Survey Team was retrieved from the ice yesterday after spending more than 75 days dragging their sleds through the arctic. They never quite reached the North Pole, and were picked up at 85ºN, but their mission will likely be deemed a successful one none the less.

The team set out in March with the intention of using sophisticated equipment to measure the health of the ice and determine the effects of global climate change on the polar ice caps. They have been continually taking samples throughout the journey, and have already sent back some of the results, but we’re likely to get more sophisticated data upon their return.

It hasn’t exactly been an easy journey for team, which consists of polar explorer Pen Hadow, Anne Daniels, and Martin Hartley. Twice they had to endure look waits between supply drops thanks to poor weather, and the conditions on the ice varied greatly across their two and a half months out. Now, with summer fast approaching, it’s time to beat a hasty retreat and head home for warm weather, a comfortable bed, and plenty of good things to eat and drink.

Meanwhile, the Baffin Babes are still enjoying their little romp around Baffin Island. Their latest dispatch came in a few days ago, in which they report that after 60 days of skiing without much snow, the skies have opened and started dumping on them. In fact, they received 40cm (15 inches) of snow in one day, and it has greatly slowed down their progress. They report that sled feels as heavy as ever, despite having less weight, thanks to the deep, wet snow.

But, they also note that the weather is warming ever so slowly, and they days are much more pleasant now. They spot seals sunning themselves on a daily basis, and bird have returned to the arctic, bringing their songs with them. They’ve been working hard over the past two months, but it sounds like they are having a great time, and are in much better spirits then they were awhile back, when they were sick, and the weather was far colder.

Enjoy it while you can girls. At some point you have to come home. 😉