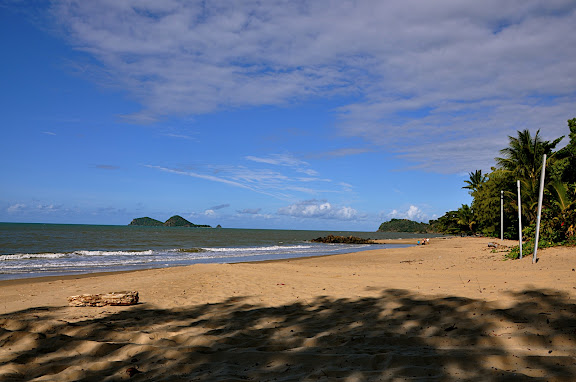 Australia has always had a spot on my list of places that I wanted to visit. It is a huge country, the size of the United States, and yet only 20 million people live there. That means vast, remote spaces, that remain largely uninhabited, spread across a dizzying array of terrains that include desert, rolling hills, grasslands, rainforest, and literally thousands of miles of coastline.

Fortunately for me, I recently had the opportunity to visit the country thanks to Backpacking Queensland, an organization designed to promote travel to that Australian state. They brought me, along with four other online travel journalists, “down under” to not only give us a small sample of the travel opportunities that Queensland had to offer, but also to acquaint us with the Working Holiday Visas that allow young travelers to explore the country while working temporarily, allowing them to fund their travels as well. This visa option has long been an option for visitors from other parts of the world, but has only recently become available for Americans as well.

One of the more daunting aspects of traveling to Oz is the long flights from the States. I flew out of Los Angeles and was heading to Brisbane, which is a 14 hour flight, on top of the 3 hours I had already spent flying from Austin, TX. Traditionally, a flight of that length is quite a challenge for me. I’m more than six feet tall, and don’t fit all that well in the seats in coach. But once again, fortunately for me, V Australia came through for us, providing tickets in their Premium Economy section that were quite outstanding. In fact, I’d say that my initial reaction is the V Australia is the best airline I’ve ever flown. The plane was a Boeing 777, practically brand new, and outfitted with a very comfortable traveling environment that included large seats, plenty of leg room, and a high tech entertainment system with dozens of movies, television shows, and games to keep you occupied while the hours pass. On top of that, the crew was very friendly, went out of their way to ensure that we had everything we needed, and genuinely seemed to enjoy their jobs. While all of that didn’t make the 14 hour flight any shorter, it sure helped to make me more comfortable. 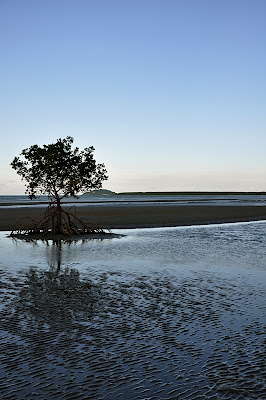 Arriving in Brisbane at 7 AM, we immediately collected our bags and set out for the domestic terminal to hop a flight to Cairns, a city of 135,000 along Queensland’s north east coast. Cairns offers access to some amazing natural wonders, including the Daintree Rainforest and the Great Barrier Reef. That means that there is excellent diving and hiking close at hand. In fact, adventure and adrenaline sports seem to be a way of life in the region, with plenty of advertisements throughout the city promising the best bungee jumping, parachuting, zip lining, and more.

While in Cairns we stayed at the Calypso Backpackers Resort, a comfortable and eclectic hostel centrally located in the city. While I was there, the place was abuzz with young backpackers from all over the planet, all of which have come to Oz to explore the country and enjoy the wonderful hospitality. Calypso is a veritable hub of activity, and at various times while I was hanging out in the common area, I saw a number of groups whisked off by shuttles to go sky diving, snorkeling on the reef, or on day trips to the rainforest.

A number of the backpackers staying at the Calypso were taking advantage of the Australian working holiday visa options to fund their trip. As I mentioned before, it is an option that allows young men and women, between the ages of 18-30, to spend up to one year in the country, mixing in work and travel as they go. The jobs available vary widely depending on what part of the country you are in, and make no mistake, they generally fall into the manual labor category. But they also usually pay quite well, allowing backpackers to save up plenty of money in a short period of time. Couple those opportunities with an extensive infrastructure designed to make it cheap and easy for backpackers to travel, and you can begin to understand how travel friendly Australia really is.

Obtaining your working holiday visa is quite easy. Simply go to this page and fill out the application, pay the $195 (Aus) processing fee, and in as little as 24 hours, you’re likely to have everything you need to travel to Oz, and remain there for up to one year. During that time, you can come and go as often as you’d like, and work as much or as little as well.

On our first afternoon in Cairns, we zipped up the scenic highway, stopping for a traditional lunch of fish and chips on a beautiful beach. After all those hours on an airplane, it was refreshing to get some good food and fresh air. The fact that the Pacific Ocean stretched out into the distance, with a half-dozen shades of blue coloring the water, was simply a bonus. 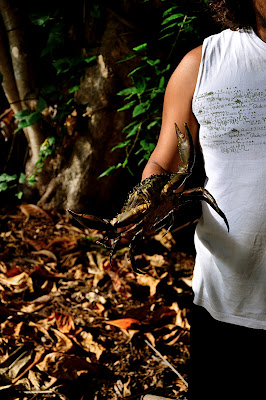 Once we were well fed, everyone wasl feeling better, and ready to have some fun. Our guides took us to meet a young man named Link, an Aboriginal whose family had lived in the region for literally untold thousands of years. It was low tide when we arrived, so Link took us out hunting for mud crabs, which are abundant in the region. Our young guide seemed to have an encyclopedic knowledge about the plants, animals, and insects in the area, giving us all kinds of facts about them, and how they could be used as natural medicines or other purposes. He also told us about Aboriginal culture, showed us a variety of boomerangs, demonstrating how each is used, and mentioned that there are still members of his tribe that live in the forests not far from his house, in the same way that they have for hundreds of years, eschewing modern life and technology. I was fascinated to hear these stories and wondered if perhaps we were being watched at that very moment.

With our mud crab hunting expedition a failure, we loaded up in the van and headed back into Cairns, stopping along the way for a couple of frosty beverages, and to grab some pizza before we crashed for the night. After the long flight from States, and relatively busy day, everyone was ready to finally get some sleep. Everyone retired to our comfortable rooms at the Calypso for a much deserved rest.

But before we knew it, morning was upon us, and we were off once again. We spent part of the morning getting a brief tour of Cairns before setting out for a two hour drive to Innisfail, a smaller, more rural, community south of Cairns. The drive gave us the opportunity to see more of the countryside, which was dominated by large sugar cain fields, the primary agricultural export from Queensland. The cain fields were incredibly dense, with the plants growing close together, and one of our guides mentioned that you definitely didn’t wan to walk through the cain, as they were thick with wild animals, including many of the very poisonous snakes that inhabit the Australian countryside. 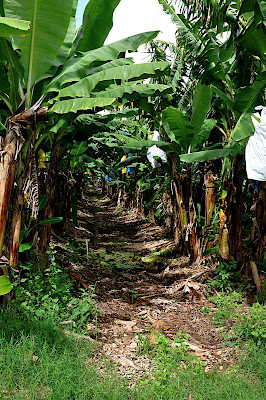 Before long, we arrived at our destination, which was a banana farm that employs a number of backpackers traveling under the working holiday visa. With more than 100 acres of banana trees, there is always plenty to do on the farm, and it was interesting to hear how the bananas were harvested and prepared for shipping to market. Working on the farm is physically demanding stuff, but a number of young travelers find that they can make good money working there, and after as little as three months, they have enough to pay for the rest of their trip through Oz.

After our visit to the banana farm, we drove into Innisfail to tour the Codge Lodge, another comfortable backpacker hostel, where many of the working holiday visa holders were staying. It was their day off, and most were lounging about, taking advantage of their downtime. Some worked on the banana or papaya farms, while others found work in local fish farms, while still others found other local jobs. I chatted with backpackers from the U.K., Ireland, Russia, France and more, all of which were in the country on the working holiday visa. Each of them noted that while they were currently working, they were still enjoying their stay in Australia, and were earning plenty of money to really see the country in the weeks and months ahead. Most planned to work 3-4 months tops, before beginning the “holiday” portion of their visa. 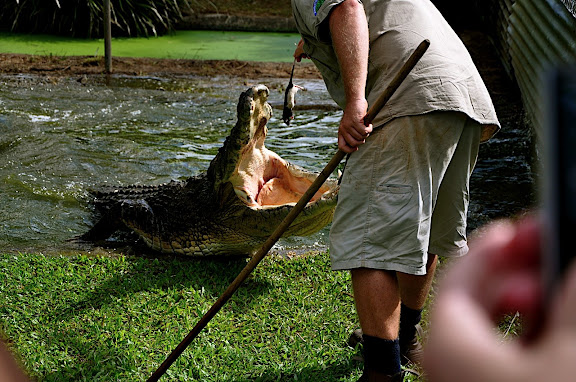 After our visit to the Codge Lodge, and a quick lunch at a local Italian restaurant, it was time to have a little fun. With that in mind, we headed over to the Johnson River Crocodile Park to meet some of the local wildlife. While at the park, we had the opportunity to hold a baby croc, feed kangaroos and wallabies right from our hands, and pet a very friendly dingo. But the real stars of the show were the massive crocs, some stretching 15+ feet in length. The highly trained, and quite possibly suicidal, staff at the park dangled food in front of these giant reptiles, and prodded them to take it from their hands. The powerful jaws of the crocodiles snapped loudly as they dutifully stood up and went after their meals, just inches from the silly man taunting them.

After our visit to the croc park, it was time to head back to Cairns, but before we did, we stopped to take a brief stroll through the rainforest at one of the nearby parks. The forest was dense and humid, and reminded me a bit of the Amazon, which I had visited a month earlier. But the paved trails lined with other hikers quickly dispelled any illusions that I was back in South America. Still, the rainforest was beautiful, and all the more so for the fact that you could go from dense jungle to some of the best beaches in the world, just by making a short drive. Our brief stroll was both relaxing and exhilarating at the same time.

After our hike, we were back on the road to Cairns, where were had plans to visit the Woolshed, a famous (or is that infamous?) backpacker hangout that offers cheap food and free flowing adult beverages. We spent the early part of the evening chatting with more young travelers working their way through Australia, but as the night went on, the music got louder, and the patrons began dancing on any available surface, including the tables.

That was our cue to call it a night, as the next day we would leave Cairns behind and head to another aea of Queensland. Our stay in the “Tropical North” was all too brief, and I felt like we barely scratched the surface of what Cairns had to offer. But I was definitely intrigued with the all the possibilities for adventure travel in the region, and not only do I think it should be on any travelers list for places to visit when heading down under, I hope to go back myself to really take it all in.