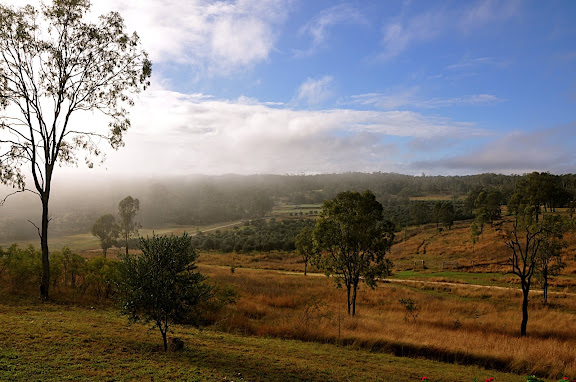 After getting a taste of Cairns and exploring the Whitsunday Islands near Airlie Beach, it was time to move on to our third, and final, destination in Australia.

Catching a late afternoon plane from Proserpine, a small Australian town with a unique airport that had just two gates, we were on our way back to Brisbane, where we immediately jumped in another van and were off on a three hour drive to Goomeri. We arrived in that small outback town, with a population of just 400, under the cloak of darkness, and quickly checked into the Grand Hotel, which offers pub accommodations upstairs, while the locals get wild in the bar downstairs.

Throughout our stay in Oz we kept hearing about a sporting event called State of Origin, in which the top Aussie rugby players from Queensland return home to form a team to play against their rivals from New South Wales, who field a similar squad. The annual grudge match is a best of three contest that pits the Queensland Canetoads against the New South Wales Cockroaches (I can’t make these names up folks), and to say that the matches get heated would be an understatement. We were fortunate to catch part of Game 1 in the Grand Hotel Pub, in which the Canetoads took down the Cockroaches, which put the patrons in a festive mood and they were more than ready to celebrate the big win late into the night. 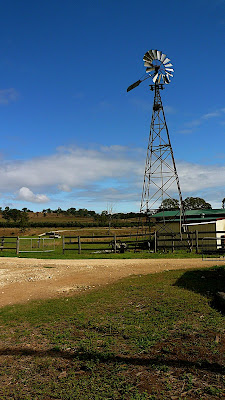 While we did enjoy the down home charms of Goomeri, and the very friendly people that live there, the reason we traveled to the Outback was to visit a local farm that specializes in helping young travelers coming to Oz on the Working Holiday Visa. Springbrook Farm is not only a working cattle ranch but also doubles as the headquarters for the Visit Oz organization, which specializes in helping young travelers acquire the skills they need to find work on farms throughout the country.

In a nutshell, it works like this. After getting their Working Holiday Visa, backpackers pay a fee to Visit Oz that gets them a few days of r n’ r at Sunset Beach before they begin their training on the farm. After three days of sand and surf, they’ll report to Springbrook, where they’ll spend an intense week learning a variety of skills to help them find work. They’ll learn to ride motorcycles and horse, drive tractors, use chainsaws, build fences, and so on. Meanwhile, as the week progresses, they’ll begin to get job offers from farms and ranches from all over Australia. Most will get two or three offers to choose from, and it is extremely rare that someone doesn’t find work through Visit Oz. Once they’ve completed their training, they’ll travel to where ever their new employer is located and begin their work, earning a minimum of $500 per week, although we were told that most made $1000-$1500, depending on their skill sets.

From there, it is totally up to the backpacker how long he or she wants to continue working. Most will work for three to four months and save up their money for their impending travels, and since most of their posting are on remote farms, which provide room and board while they are there, they tend to save a lot of money up very quickly. 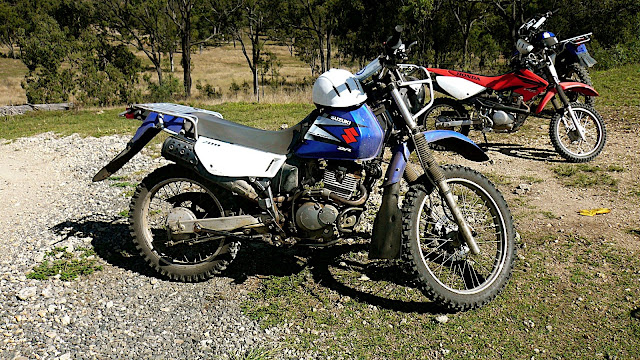 We ended up spending a full day on the farm, reporting early for breakfast, and then beginning motorcycle training. Some of us had ridden before, while others were experiencing it for the first time, but after quickly getting oriented with the bike, we were all off and riding in no time. We spent a short time just riding in the training yard, but later we took the bikes out onto a series of trails that ran across the property, which offered us some new challenges and helped to build riding skills further.

With the morning consumed riding the bikes, we took a brief break for lunch before turning our attention to the horses. We were all eager to get riding, but before that could happen we had brush down our mounts and clean their hooves, and then saddle them as well. Most of those skills were new to me and the other writers, but it is part of the training process that everyone who comes to Visit Oz goes through, and we were given an accurate, albeit abbreviated, look at that process.

Eventually we were saddled up and out on the trail, and once again exploring Springbrook Farm, which has over 900 acres of land. The plan was for us to get comfortable on horseback before bringing some cattle in from the field. For some reason, a few of the horses decided today would be the day that they would be a bit temperamental, so a some of us had to deal with mounts that weren’t always completely cooperative. My horse, a big pale beast named Prince, wasn’t taking too kindly to a couple of new additions to the paddock, and any time we wandered too close to one of these newcomers, I’d take the opportunity to nip at one of them, and show his discomfort by kicking up his heels. This didn’t do anything to endear him to the rider, namely me, who was generally holding on for dear life. Eventually I learned that we’d both get along much better if I kept Prince away from these offending newcomers, and the rest of the ride went much better, including rounding up the cattle and herding them back to the corral.

We finished up the day by learning to drive a tractor that would typically be used on farms throughout the country. It was a fairly simple process, even for those who have difficulty with a manual transmission, although the nuances of using it in the field would take longer than the short time we had practicing. 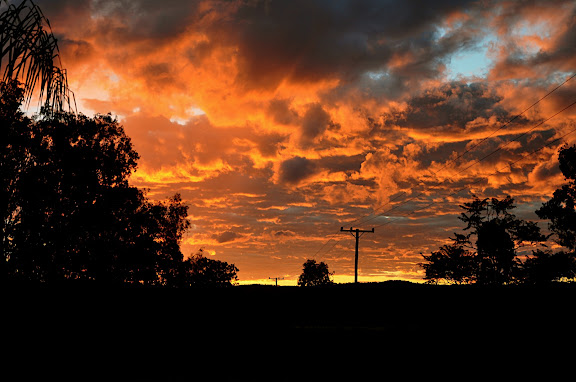 After our long day of training, we stayed at Springbrook for an evening barbecue that gave us the opportunity to chat with several young backpackers that were going through the Visit Oz program. They had been there for a few days and had quickly picked up a number of news skills. Several were already beginning to get job offers and they were weighing their options for the months ahead. Most didn’t have any idea how long they wanted to work for, but they definitely had the intention of enjoying their stay in Australia once they finished their work. At the dinner table that evening there were young people from South Africa, the Netherlands, and the U.S., although we were told that there are still very few people coming from the States to take advantage of the Working Holiday Visa.

And with that, my visit to Australia was coming to an end. We returned to Goomeri for another night at the Grand Hotel, before catching an early morning ride back to Brisbane where we would, eventually, catch a flight back home. My week Down Under was packed form end to end with activities and I was sad to be leaving it behind when I felt there was still so much more I wanted to see. Australia is an easy place to fall in love with. The landscapes are diverse and breathtaking, the people are incredibly friendly, and the infrastructure is in place to make the entire travel experience as painless as possible. I can’t recommend it enough to anyone looking for a comfortable and easy trip abroad that still offers plenty of adventure.

I wanted to send out a BIG THANK YOU to the good folks at Backpacking Queensland for inviting me to come visit there wonderful country, and to V Australia for providing the plane tickets and an amazing onboard experience. It was all very much appreciated.

2 thoughts on “Australian Adventures: Down on the Farm!”