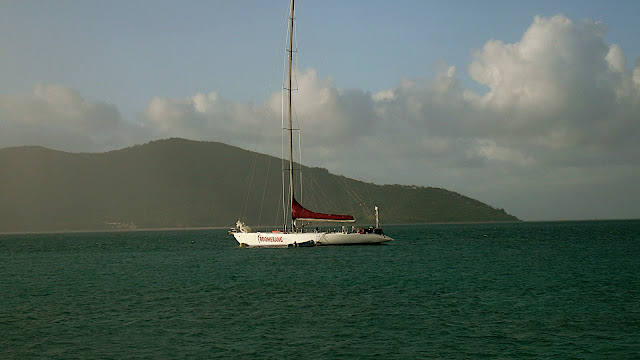 On my third day in Oz, we were up before sunrise, and whisked off to the airport once more to catch an early flight out of Cairns. To be honest, I was a bit sad to be leaving so soon, as I knew that we had barely scratched the surface of what the city had to offer, but we were heading on to other adventures, in other parts of Queensland.

Before long we were on a plane for Townsville, where we were met by yet another guide and van that soon had us out on the open road and bound for the tourist town of Airlie Beach. The three hour ride would give me the opportunity to take in more of the Aussie countryside as we moved away from the coastline and into more arid sections. The highway was a bit more remote, passing through small towns that were not unlike the rural settings found here in the States, except that the roadkill consisted of kangaroos instead of deer. We even passed through the town of Bowen, which was prominently featured in Baz Luhrman’s epic film Australia which was released last year. Portions of the town, including its long wharf, were easily identified, although sadly there were no Hugh Jackman or Nicole Kidman sightings.

Eventually we rolled into Airlie Beach, and drove straight to the harbor, which was lined with impressive ships and yachts of all shapes and sizes. The plan was for our group of six, the five writers and Anna, our Aussie chaperone, to split up on to two different boats and set sail for the Whitsundays, a series of 74 islands sprinkled across the Great Barrier Reef. The region is renowned for its incredible diving and sailing opportunities, and are famous for their breathtaking beauty.

My group was the first to depart, and we barely had time to grab our bags and throw them up on deck before we were underway. We were aboard a tall sailing ship called the Boomerang that was once a wold champion racer, and still could crank up the speed when it had to. Over the course of the next few days, we, along with 20 or so other young travelers, would be living aboard the ship, and would have plenty of opportunity to witness that world class speed for ourselves. In the process, we also became part of the “crew” and learned to crank up the sails, and stay out of the way while the real crew did their job.

The better part of the next two days were spent exploring the waters around the Whitsundays, which I found to not only meet, but exceed their reputation for beauty. In those two days we not only sailed the open waters, but also snorkeled the Great Barrier Reef, which teemed with life as schools of colorful fish swam just out of reach.It was a bit surreal to drift along in the crystal clear waters, surrounding by so many species of fish, but it was also one of the most amazing moments of the entire trip. 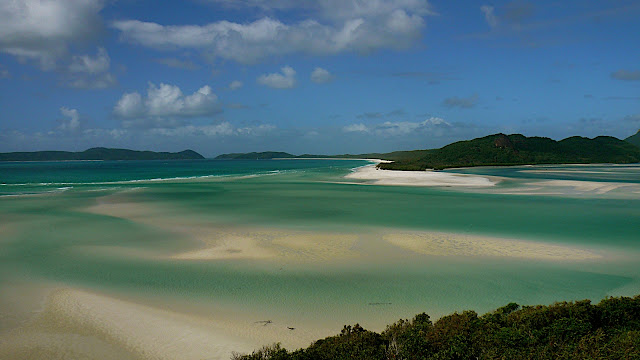 One of the mornings we went ashore on Whitsunday Island to visit a stunning beach that looked like something you would find on a postcard. The very fine, white sand stretched out into the water, creating a barrier. On one side, there were the rising tides and growing swells of the Pacific Ocean, with ships drifting on the horizon. On the other, were calm, clear waters that sparkled in the morning sun, while manta rays drifted just beneath the surface. Did I mention how surreal it was here as well?

Nights on the boat were generally spent chatting, playing some games, and consuming copious amounts of a locally popular, cheap, boxed wine, affectionately dubbed “goon”. Most of the passengers aboard the Boomerang were young backpackers who were in Australia on extended vacations. Some of them had come on the working holiday visa, and were now enjoying the fruits of their labor. After spending several months working on farms, picking fruit, or any number of other occupations, they decided it was time to cash out, and begin enjoying their holiday instead. Most were working their way up the Queensland coast, taking in the scenery and relaxed beach culture lifestyle, while spending the money they had earned. Some intended to stay until their year was up, others until the money ran out, although they didn’t dismiss the options of working for a month or two again to continue their travels. 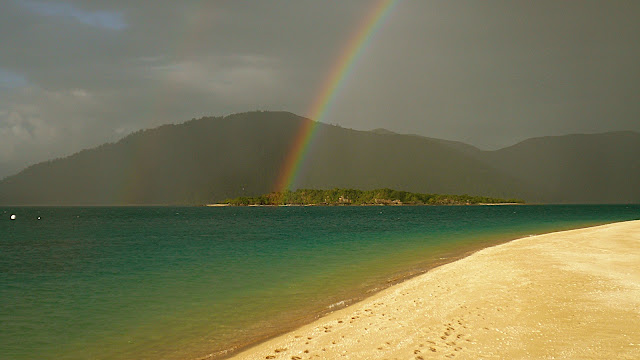 Before we knew it, our two days on the Boomerang were finished, and we were returning to Airlie Beach, which is a sleepy little beach town that probably wouldn’t exist if it weren’t for the tourism industry. Its proximity to the Whitsundays and The Great Barrier Reef make it a favorite stop over for backpackers driving from Brisbane to Cairns, and it is an easy place to kill a number of days.

While in Airlie, I stayed at the local Youth Hostels of Australia location. Once again, it was comfortable, clean and functional, and relatively quiet considering the age and activities of the cliental. I also had the opportunity to tour Airlie Waterfront Backpackers, another local hostel, that had a completely different feel from the YHA that I stayed at. The Waterfront had a more homey feel, and it seemed like a place you would want to hangout in, and not just sleep. Perhaps that is why there were more backpackers on the Working Holiday visa staying there, since they were in town for extended stays, they wanted a place that was more conducive for calling home in the months that they would be working in Airlie Beach.

While touring the Waterfront Backpackers, and later when we stopped for dinner and drinks at the Beaches Backpacker Bar we met yet still more travelers taking advantage of the Working Holiday visa. When we were in Cairns, these young backpackers were often working on farms and picking fruit, but in Airlie Beach there weren’t as many of those types of job, so instead they found work on the various boats sailing the Whitsundays. As crew members on the various sailing vessels, they worked as deck hands, cooks, diving instructors, and more. Many preferred these types of jobs to the manual labor that is offered in other areas of Queensland. 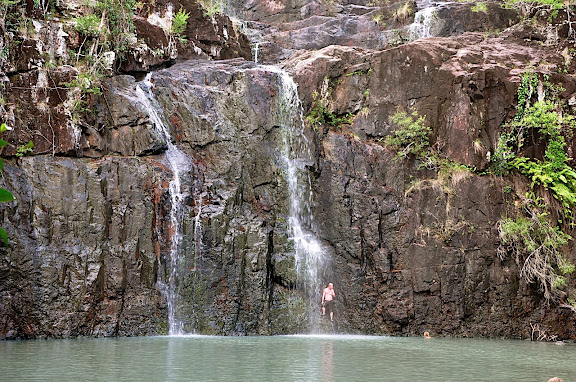 Following a late night of drinking and dancing at Beaches, we were off and running once again the next morning. We had another flight to catch, but not until later in the afternoon, and not before we drove out of Airlie Beach to visit Cedar Creek Falls, a lovely little spot in the woods that is off the beaten path for most tourists. We brought a picnic lunch with us, and settled in under the trees along the rocky shore of a crystal clear pool of water that was fed by a cascade of falls pouring down a 50 foot rock face no more than twenty yards away. A curious turtle rose to the surface and paddled about, while we nibbled on chicken sandwiches and soaked in the surroundings. Later, a quick hike up a near by trail, thickly lined with ferns, took us to the top of the falls for a completely different perspective.

Back in the cars, we were once again on the road and heading to the airport. Our time in Airlie Beach was at an end, and we had one more region of Queensland to visit before it was time to head home. I felt much more satisfied with my visit to Airile Beach than I did Cairns, in part because I had more time to explore the area, the amazing Whitsunday Islands were an incredible playground for a couple of days. We snorkeled on the Great Barrier Reef, swam in the Pacific, and sailed in one of the most pristine settings on the planet. It was a wonderful example of the adventures that were to be had in Queensland, and I felt blessed for having had the chance to take it all in.

Next stop was a small town called Goomeri, an outback town that would be unlike anything we had experienced so far.

4 thoughts on “Australian Adventures: The Whitsunday Islands and Airlie Beach”